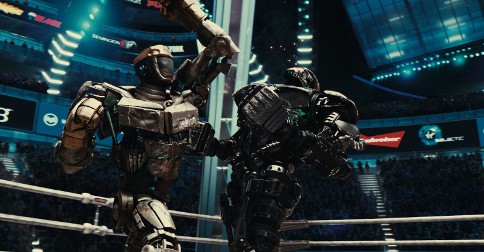 A Beyonce-inspired skyscraper, a Han Solo movie, and more.

1. A giant robot fight is actually going to happen

Think of it as all your Real Steel and Transformers dreams coming true. Two robotics companies from the U.S. and Japan are prepping to combat in an epic duel. Last month, U.S.-based Megabots challenged Japan's Suidobashi Heavy Industry to a battle, which the latter accepted on July 5. Although no venue or date has been set, both teams have a year to make the necessary modifications for robot-to-robot combat.

2. A solo movie for Han Solo

If your favorite Star Wars character is Han Solo, rejoice! Disney announced plans to make a stand-alone film about the character, which will be separate from the previously announced Rogue One movie. The plot will focus on the origins of a much-younger Han (sorry, Harrison Ford fans) and how he became the likeable scoundrel he is today. The film will be directed by Chris Miller and Phil Lord, whose previous works include The Lego Movie and the 21 Jump Street reboot.

After news broke that 15-year-old Julia Louise Buencamino reportedly committed suicide, her Oh My G! co-stars took to social media to mourn the sudden loss. Janella Salvador (who plays Julia's best friend in the show) wrote, "I am deeply saddened and shocked [...] May your soul be guided by G." Meanwhile, Marlo Mortel posted, "We shared a lot of moments together and always had the longest hugs. I just hope you're happy wherever you are now."

On Wednesday, James Reid denied rumors that he is dating his Para Sa Hopeless Romantic co-star, Julia Barretto. He said he didn't even have Julia's number and added, "[Online bashers] said I’m quiet about it. I don’t have to explain myself in everything that comes out because it’s not worth my time. I don’t really mind, but I’m just grateful to have fans, they defend me and don’t listen [to rumors] easily." The two were reportedly seen having a coffee date recently.

Yes, you read that right. An architectural firm in Melbourne, Australia said that the design of the Premier Tower was inspired by Beyonce's music video for "Ghost." The tower will house 660 apartments and a 160-room hotel.

FBI agents and Indiana State Police raided the home of Subway restaurant spokesman Jared Fogle on Tuesday, months after the then-executive director of Fogle’s foundation was arrested on child pornography charges. Although Fogle hasn't been directly linked to the charges, Subway "suspended their relationship" and removed references to him on their website.

Fogle was the restaurant chain’s spokesperson after losing 245 pounds over 15 years ago, in part by regularly eating Subway sandwiches. His story was reportedly instrumental to the chain's healthy-eating image.

In an interview, former Senator Loi Estrada said that while she believed her husband, Manila Mayor Joseph Estrada, is still capable of holding office and "serving the public," she didn't want him to run for president. Erap has not yet declared his 2016 plans, but has said he is open to running for president if Vice President Binay drops out of the race.

Caloocan Representative and Liberal Party (LP) Chariman for Political Affairs Edgar Erice said that the party is open to Manny Pacquiao joining its senatorial lineup. "There's a lot of LP members who are really endorsing him," he said Erice, but added that they are also looking at other candidates who will have to undergo a screening process.

It's tough living in Manila. You've got the usual traffic and pollution but somehow, things get about a hundred times worse with a little downpour. Here are 10 rainy season problems in Manila.

10. 10 Ways to Tell If You're a Certified Kontrabida

Do you have a signature evil laugh? A black hole where your heart should be? Then you can probably relate to this list.