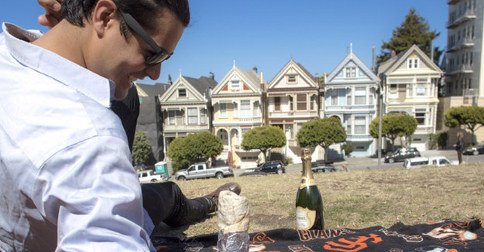 1. A man had a hilarious engagement photoshoot with a burrito

Everyone loves food, right? Well, this guy took it a bit too far...with hilarious results. A writer named David Sikorski was tired of all the cheesy couple-y photos on Facebook, so he took matters into his own hands. He announced his engagement to his one true love—a burrito—and had a romantic photoshoot around San Francisco.

After rumors surfaced that some finalists of FHM's Sexiest Women poll boycotted the July 11 victory party, Andrea Torres (who ranked second) took to Instagram to clarify reports. She thanked FHM and the fans, and added, "I would like to categorically state that I have no problem whatsoever with Jennylyn's [Mercado] victory. I even congratulated her before the event and told her that I’m sure many are anticipating her ramp appearance, so I’m really happy for her and everyone who made it on the list."

A pair of Judy Garland's famous ruby slippers from The Wizard of Oz was stolen from the Judy Garland Museum in her hometown of Grand Rapids, Minnesota in August 2005. An anonymous donor (and a reported "huge fan") came forward two weeks ago and offered a staggering U.S. $1 million to anyone with information on its whereabouts. To claim said reward, the exact current location of the slippers and the perpetrators must be given.

Reports say that the owners of the donut shop where Ariana Grande was caught licking merchandise on display won’t press charges against the singer. Since the video leaked, Ariana has apologized twice via Twitter and a video message.

Things aren't looking so good for Donald Trump. After being dropped by multiple companies thanks to his racially charged tirade against Mexicans then boasting of his "kickass" abilities to capture one of history's biggest Mexican drug lords, it looks like he's eaten his words.

A Twitter account that allegedly belongs to one of El Chapo's (or Joaquin Guzman, a Mexican drug lord who recently escaped from a maximum security prison) sons allegedly threatened Trump. Roughly translated, it said, "Keep f*cking around and I’m gonna make you swallow your b*tch words you f*cking whitey milksh*tter." Apparently, it spooked Trump enough to contact the FBI.

The Sandiganbayan First Division has allowed Senator Ramon "Bong" Revilla Jr. to leave his detention facility for five hours to visit his ailing father, actor and former Senator Ramon Revilla Sr., who is currently confined in a hospital. He was given the option to go to St. Luke's Medical Center in Bonifacio Global City either on July 14 or 15. The older Revilla was rushed to the hospital on July 11.

Director Ricardo Marquez is the Philippine National Police's new chief, taking over the position previously held by Deputy Director General Leonardo Espina, who is set to retire on July 16. Marquez was the head of the 20,000-strong police task force during the visit of Pope Francis to the Philippines.

From Adam Levine's "Lost Stars" to Taylor Swift's collaboration with The Civil Wars, we round up 10 radio-friendly tunes from movies that stuck with us.

Ahh, aging. You can't avoid it. Sometimes, you still think the '90s were 10 years ago. (No, they weren't.) Other times, you question the merit of songs about butts. Here are 10 senior moments you've probably experienced.