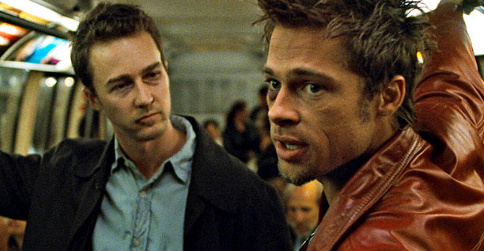 Seaweed bacon, Daniel Radcliffe fails as a receptionist, and more.

1. Fight Club is getting a stage adaptation

Here's something we thought we'd never hear. Fight Club author Chuck Palahniuk has confirmed that the film's director David Fincher will be bringing the cult classic to the stage. (Maybe even the Broadway stage.) Oh, and it's going to be a rock opera. The music will be by Nine Inch Nails' Trent Reznor, who previously worked with Fincher for The Social Network, Gone Girl, and The Girl with the Dragon Tattoo.

2. An Aladdin prequel is in the works

Disney has officially green-lit a prequel to Aladdin. More specifically, a live-action prequel revolving around the Genie (once played by Robin Williams). The film will follow the Genie before he was imprisoned in the lamp. According to The Hollywood Reporter, the long-term plan is for the film to lead to a live-action adaptation of Aladdin.

3. Julia Montes is returning to TV

Actress Julia Montes will be back on your TV screen very soon with her new telenovela, Doble Kara. She will be starring in the show alongside newcomer Anjo Damiles and former Your Face Sounds Familiar contestant, Edgar Allan Guzman. No plot has been disclosed, but the show will also star Ariel Rivera, Mylene Dizon, and Patricia Javier.

4. Will Claudine and Piolo be reunited in a movie?

Director Wenn Deramas revealed that there were plans to do a movie with Claudine Barretto and Piolo Pascual, but the project was momentarily set aside to make way for The Breakup Playlist (starring Piolo and Sarah Geronimo). He didn't mention if the film was pushing through, but he said that Claudine approved of the story. Claudine and Piolo were last seen together in the 2004 film, Milan.

Daniel Radcliffe is lucky he has that whole acting gig going, because he sucks as a receptionist. He went undercover for a hidden-camera prank in Nylon magazine's front desk. He managed to go unnoticed for a while until a few employees started to notice who he was. He spent an hour being sweet and friendly, but completely messing it up when it came to clerical work. Even Joe Jonas wasn't impressed.

If you're trying to eat healthy but can't seem to shake your bacon fix, you should probably get yourself some seaweed. After 15 years, researcher Chris Langdon and his colleagues at Oregon State University have patented a particular dulse (a form of seaweed) that's packed with protein, low in calories, and when fried, is said to taste exactly like bacon.

Davao City Mayor Rodrigo Duterte may campaign against Interior Secretary Mar Roxas and the Liberal Party (LP) if Justice Secretary Leila de Lima joins the LP ticket in 2016. In an interview, Duterte said that he might even run for a national position if it were to happen. In May, Duterte reportedly "lashed out" at de Lima over what he perceived as her attacks against him over his alleged links to the Davao Death Squad.

President Benigno Aquino III said Thursday he is already "closer" to choosing his preferred successor after his Wednesday night meeting with Interior Secretary Roxas and Senators Grace Poe and Francis Escudero. In an interview, Aquino said he and the other three agreed that they will continue the reforms he started come election time in 2016. He also plans to talk to "various other groups and other personalities" first before making the announcement.

9. 10 Pinoy Movie Boyfriends We Want to Have

Admit it: You've probably wished you could date one of the dreamy fictional men you watch onscreen. We round up 10 of the most swoon-worthy characters we'd love to date.

In the mood for some dim sum? We found the best and tastiest hakaw dishes in the metro. (Hotels not included!)