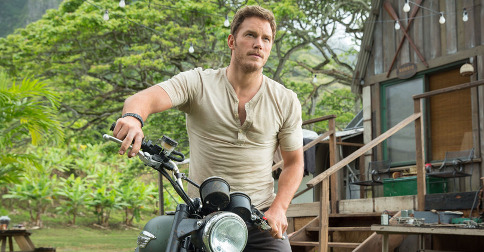 1. A Jurassic World sequel is confirmed

It's official! A sequel to the highly successful Jurassic World movie (it's now the third highest grossing movie ever) is coming to theaters in 2018. Director Colin Trevorrow will once again direct the sequel and co-write the screenplay with Derek Connolly (Safety Not Guaranteed). Chris Pratt has already said he'll be back.

Yep, he's still here. In a video posted on his Instagram account, Chris Brown got on his knees and begged Philippine authorities to "let [them] leave." The post was later deleted. In two subsequent tweets, the singer wrote, "I have nothing to do with anything going on right now. I came back to Manila to do a make-up show for New Year's. I did the show three days ago. This is a very serious situation and someone needs to be held accountable for mixing my name up in all this. I've done nothing wrong!"

The Justice Department barred him from leaving unless he can produce a document that certifies he has no legal obligations in the country, but according to the Bureau of Immigration, Brown has not applied for it.

Tom Moore, the man who helped develop Archie and the gang from 1953 to 1988, passed away Monday morning due to lung cancer. The 86-year-old also worked on other comics such as Mighty Mouse and Underdog. (Read more about the Archie Comics reboot.)

4. LizQuen set to do another movie

5. Watch the new teaser trailer for The X-Files revival

Okay, so it's just 17 seconds but hear us out. It's 17 seconds of Mulder and Scully meeting again! The show also just announced new additions to the cast, including Robbie Amell (The Flash) and Lauren Ambrose (Six Feet Under) as FBI agents. The Lone Gunmen are also confirmed to return.

6. Astronomers discover most Earth-like planet yet

U.S. scientists announced that a planet remarkably similar to Earth and potentially capable of sustaining life has been discovered! The planet, which is about 60% bigger than Earth, is located about 1,400 light years away in the constellation Cygnus. It was discovered with NASA's Kepler space telescope and circles a star that has a similar size and temperature to the sun.

A lone gunman opened fire inside a crowded movie theater in Lafayette, Louisiana on Thursday evening (Friday morning in the Philippines). According to police, two people died in the hail of bullets before the 58-year-old suspect killed himself with a handgun. Seven other people suffered injuries. Authorities said they knew the gunman's identity but refused to release his name, as they are still in the early stages of the investigation.

On Friday, Justice Secretary Leila de Lima ordered the National Bureau of Investigation (NBI) to look into the allegations that several ministers of Iglesia ni Cristo have been abducted. She gave the order two days after Cristina "Tenny" Manalo and Felix Nathaniel "Angel" Manalo, mother and brother of Executive Minister Eduardo Manalo, respectively appealed for help due to alleged threats to them. De Lima added that the probe would only be initial, and the NBI will later decide to switch to a formal investigation.

9. Why You Can't Eat the Best Chocolate Crinkles in Manila

The Undercover Eater infiltrates the Asian Development Bank for a taste of this scrumptious and revered treat. Trust us, they're worth all the trouble.

Certified suplado funnyman Stanley Chi is set on answering all your love-related concerns. This time, he answers the tough question of what to do when you see your ex.