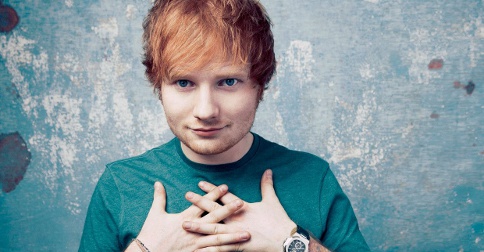 1. Ed Sheeran is headed to TV

...but he'll be doing a different kind of performance. The British singer-songwriter will have a recurring role on the FX drama The Bastard Executioner, a "blood-soaked medieval epic." He will play Sir Cormac, an ambitious and deadly protégé of a high-ranking church elder. There's still no word on when the show is set to air.

Kris Aquino has never been one to ignore comments on her social media accounts. Several fans took to her Instagram account to ask if Phillip Salvador (the dad of her son, Josh) was "out of the picture." She replied, "I have been solely financially responsible for Kuya's upbringing for most of his life, let me emphasize I'm not calling anybody out—God truly blessed me with the financial capacity to care for my panganay." She also hinted that Phillip was not involved in his son's life.

In a separate comment, she told her followers that she also doesn't get financial support from James Yap, the dad of her second son, Bimby.

3. Jericho Rosales to do a new movie

Jericho Rosales is set to star in another movie after his telenovela, Bridges of Love, comes to a close in two weeks. He said that he has already received scripts, saying, "Hanap muna ako ng maganda tapos kapag mayroong maganda eh 'di go." He added that he already has a new series lined up for next year, but didn't disclose any details. As for any baby plans with his wife, Kim Jones, Jericho said that they would like to have a baby in two years.

4. Madonna gives a preview of her Rebel Heart Tour

Here's something Madonna fans can look forward to before her February 2016 concert in Manila: The Queen of Pop has released teaser video clips of her rehearsals, which include glimpses of elaborate props and dramatic costumes. There are also nuns dancing on poles, which might be a problem in the Philippines...or the CBCP, more likely.

5. U.S. $1 million in treasure recovered from the ocean

It's like a pirate's dream come to life. A team of Florida treasure hunters have uncovered over U.S. $1 million in gold from the Atlantic Ocean. This isn't the first time the shipwreck has been excavated, but this find uncovered 60 gold artifacts from the area where 11 Spanish ships sank on July 31, 1715. Florida-based company Queens Jewels owns the rights to the exploration of the wreck and announced the discovery on Tuesday.

The Boy Scouts of America (BSA) Executive Committee voted on Monday to lift its ban on openly gay scout leaders. They also voted to allow church-sponsored scout troops to exclude gay scout leaders based on "religious reasons." The historic move comes after the organization earlier lifted its ban on gay scouts.

7. VP Binay vows to deliver his own version of a SONA

When asked about his reaction to P-Noy's State of the Nation Address (SONA), Vice President Jejomar Binay told reporters that he would give his own version as a response. He didn't specify, however, when he would deliver his supposed speech-slash-reaction. P-Noy is believed to have taken a swipe against Binay in his SONA, saying, "Kahit kaliwa't kanan na ang ebidensiya ng pagbabago, mayroon pa ring kontra sa Daang Matuwid. Ang hirit nila: Mabagal daw tayo. Kapag sila raw ang naging pangulo, sigurado, gaganda ang buhay."

Senator Francis Escudero on Tuesday resigned as chairman of the powerful Senate Committee on Finance and as co-chairman of the Joint Congressional Oversight Committee on Public Expenditures. The reason? He's seriously considering running for higher office. In his letter to Senate President Frank Drilon, he said he resigned to keep the upcoming budget deliberations free from politics.

9. INFOGRAPHIC: 10 Most Expensive Concerts in Manila

We rejoice whenever we hear our favorite artist is coming to Manila, but our wallets probably don't share that same sentiment. From Katy Perry to Madonna, we listed 10 of the most expensive concerts in Manila...so far.

10. 10 Fruit and Veggie Chips to Shake Up Your Junk Food Habits

Move over, potato chips. These days, there are plenty of snacking options available that are surprisingly just as addictive.