This awkward interview with Cara Delevingne will make you cringe + more things you might-have missed today
Loading
Already a member? Log in
No account yet? Create Account
Spot.ph is your one-stop urban lifestyle guide to the best of Manila. 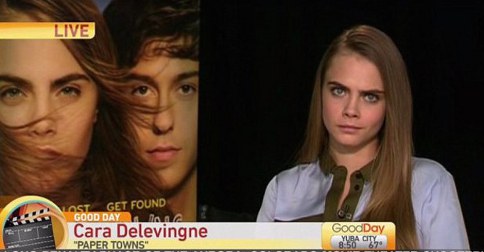 1. This awkward interview with Cara Delevingne will make you cringe

Here's a little tip: When you're interviewing a celebrity, make sure you get their name right. The presenters of Good Morning Sacramento didn't and ended up calling Cara Delevingne "Carla." The whole thing is pretty painful to watch, especially when the host advised the "irritated" actress to "take a nap."

Incidentally, Salud discovered Melanie Marquez (Winwyn's aunt) who later won Miss International in 1979. Winwyn admitted that she was hurt by his remarks and said, "Pero you just have to handle it well, you just have to respect people's opinion." Now that's a queenly answer.

Reports say that Enrique Gil and Liza Soberano are set to do another romance film, this time alongside Gerald Anderson. Enrique plays Ethan, who falls in love with a barrio lass named Audrey (Liza), who is in a relationship with Tristan (Gerald). The film, entitled Everyday I Love You, still has no release date.

It's official! After rumors surfaced that Chris Pine would play Wonder Woman's love interest, reports now say that he has signed on for the role of Steve Trevor. In the comics, Steve is an intelligence officer from the army who crashes into an island and is nursed back to health by Diana Prince (Wonder Woman's alter ego). The actual plot of the stand-alone film starring Gal Gadot is still under wraps.

5. Google now shows you how to avoid long lines at your favorite restaurant

Google has unveiled a new search feature that allows you to see when an establishment is most likely to be busy. Location cards, which typically display the business hours, address, and contact details, will now have a "popular time" section. The latter can be accessed if you select "more about" when you search via the Chrome app on iOS and Android. Google says it has enabled the feature for millions of places and businesses around the world.

6. Jane Birkin asks Hermès to take her name off bags

The inspiration behind Hermès' luxury Birkin bag, British singer and style icon Jane Birkin, is protesting the alleged practices used to created one of the label’s most famous (and expensive) creations, the crocodile Birkin. After PETA reportedly uncovered brutal crocodile slaughter done by the company, Birkin released a statement, saying, "I have asked Hermès to [debaptize] the Birkin Croco until better practices in line with international norms can be put in place."

Meanwhile, the label said that they have launched an investigation into the Texas farm, saying, "...Hermès specifies that this farm does not belong to them and that the crocodile skins supplied are not used for the fabrication of Birkin bags."

According to Palace spokesperson Edwin Lacierda, President Aquino is determined to pass the Freedom of Information bill within his term. P-Noy supposedly promised the FOI's passage in an open forum last year, "no ifs, no buts."

8. Meralco may have higher electricity rates in August

The Manila Electric Company (Meralco) announced a possible increase in electricity rates in August, partly due to supply restrictions. "As we have stated, we have to wait for the actual billings from our suppliers but indications show na posibleng may epekto sa presyo," said spokesperson Joe Zaldarriaga. They clarified, however, that they have yet to determine the actual rates for the upcoming month.

An intense hair-pulling scene is practically synonymous to Pinoy drama. Sometimes, it's paired with a resounding slap. Other times, there's some creative use of props. We round up the best scenes from Pinoy TV and movies.

There's driving in Manila and then there...well, whatever you call this. These "pros" on the streets are the reason for the angry posts on social media and the headache you're nursing during rush hour.