First it was Cecil the lion, now there are only four Northern White Rhinos left in the world + more things you might have missed today
Loading
Already a member? Log in
No account yet? Create Account
Spot.ph is your one-stop urban lifestyle guide to the best of Manila. 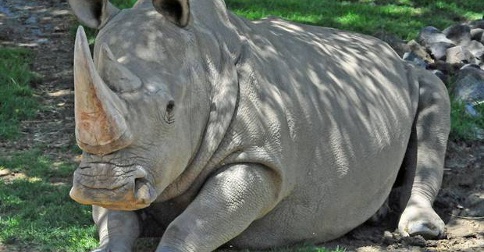 First it was Cecil the lion, now there are only four Northern White Rhinos left in the world + more things you might have missed today

1. There are only four Northern White Rhinos left in the world

It's absolutely heartbreaking. Nabire, one of the last five Northern White Rhinos left in the world, has died at the Dvur Kralove zoo in the Czech Republic. The 31-year-old female died of an untreatable ruptured cyst, leaving only three females and one male left alive. The sub-species has been on the brink of extinction for years due to hunting and habitat loss.

It's official! Former One Direction member Zayn Malik is now a solo artist. He signed with Sony's RCA and made the announcement in a series of tweets, saying that he left the boy band to be "given the opportunity to show you who [he] really [is]." Simon Cowell also tweeted his congratulations, writing, "I believe they are the perfect label for @ZaynMalik’s solo career and I am sure whatever they release together will be special."

3. Cristine Reyes will no longer do "sexy roles"

Actress Cristine Reyes is making a showbiz comeback with an upcoming ABS-CBN telenovela entitled Tubig at Langis alongside Zanjoe Marudo. Although no plot details have been disclosed, she said that the show will be a departure from the sexy roles she frequently did when she was younger. "Dapat may bagong dapat gawin, kumbaga sa school, 'di ba, graduate na tayo diyan. So ngayon ibang level naman tayo. Focus tayo sa more dramatic area naman."

You might remember reports saying Chiz Escudero has resigned from two Senate committees in order to run for higher office. His wife, Heart Evangelista, told reporters that she will support him but said that they haven't talked about what position he intends to run for. "Kung anuman ang mga desisyon niya, sigurado akong pinag-aralan niya 'yon. Siguradong alam niya ang ginagawa niya," she said.

5. Google is adding Filipino, other languages to Google Translate app

Google Translate now lets you instantly translate printed text in 27 languages without Internet connection. The real-time text translation began with seven languages (including French, Italian, and Spanish) with new languages that include Filipino, Indonesian, and Swedish. Google's picture mode translation, which requires a snapshot of text, can operate in 37 languages.

6. New study predicts about 31,000 deaths in Metro Manila after 'The Big One"

Philippine Institute of Volcanology and Seismology (Phivolcs) executive director Renato Solidum said the latest Phivolcs and Geoscience Australia study showed that as many as 31,000 people could die if a quake of at least magnitude 7.2 hits Manila. The figure is based on a night-time quake scenario, when most people are already in their homes and asleep.

Camarines Sur Rep. Maria Leonora ''Leni'' Gerona Robredo is considering a possible run for the Senate. The widow of the later Interior Secretary Jesse Robredo said that running for re-election is her primary option, followed by a possible Senate bid, but clarified that she might also opt to leave politics.

According to ranking Liberal Party officials, President Aquino will formally endorse the candidacy of Interior Secretary Mar Roxas for president on July 31 at Club Filipino in San Juan City. The Palace, however, still remained tight-lipped about the rumors, with Presidential spokesperson Edwin Lacierda saying, "Everybody is waiting. Hintayin na lang natin."

The selection for a vice president is still ongoing.

When you have or know of kids that are glued to their tablets, it's time to take them to KidZania, a fun and interactive space where they can take on grown-up roles. It's opening on August 7 but we have your first look!

10. 10 Typography and Lettering Books That Will Kickstart Your New Hobby

If you're looking to try your hand at calligraphy or typography, we found 10 books that would be perfect for you!