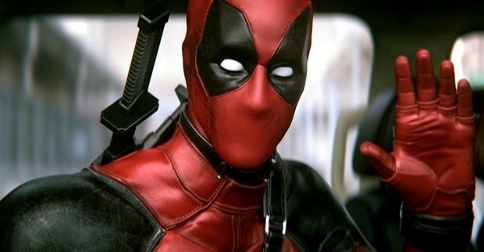 1. The NSWF trailer for Deadpool is finally here

The much-awaited trailer for Marvel's Deadpool has finally been released! Ryan Reynolds stars as the titular anti-hero with accelerated healing powers and a dark, twisted sense of humor. The upcoming superhero comedy is slated to hit theaters February 2016.

2. Shaina opens up about reunion with John Lloyd

She also said that there was no awkwardness between them because they "see each other around."

In a (mock) PSA, actor Kevin Bacon is calling for more male nudity in Hollywood. (In his own words, he wants more male actors to "free the bacon.") He even called out Game of Thrones and Fifty Shades of Grey for their lack of male nudity, with a useful hashtag: #FreeTheBacon.

4. CharDawn to do new telenovela together

First, it was a new movie. Now Richard Gomez and Dawn Zulueta are starring in their own telenovela together called You're My Home on ABS-CBN. Richard said that they were already taping the show, but had to momentarily pause to finish The Love Affair. Filming will resume once their movie hits theaters this August.

Move over, Marty McFly! Lexus has unveiled a real, working hoverboard! The company, which has worked with scientists  for over a year, debuted the new gadget in a skatepark, with skateboarders performing stunts. If you're wondering how much it'll cost you, it's not being offered as a commercial product...yet.

6. Bride asks 89-year-old grandma to be her bridesmaid

Here's some heartwarming news for you today. Christine Quinn, a new bride from Pennsylvania, asked her 89-year-old grandma to be one of her bridesmaids in her nuptials. "She was adorable," Melton wrote in a blog post. "Nana Betty could keep up with the non-stop shenanigans (read: non-stop laughter)."

She said that it was an easy decision, adding, "While she doesn’t live that close, we have continually made it a point to spend as much time together as possible." Too cute!

Well, this is ironic. A development firm called Oceanville Hotel and Spa Corp. is planning to restore the historic Manila Army and Navy Club...into a five-star boutique hotel. The Department of Environment and Natural Resources (DENR) granted a tree cutting and earth-balling permit to Oceanville, angering heritage and environment advocates.

The National Historical Commission of the Philippines (NHCP) issued a Cease and Desist Order (CDO) against the developer last year, but it looks like the project is pushing through.

8. Mar Roxas asked Grace Poe to be his running mate

In an interview with GMA's Unang Balita on Wednesday, presidential candidate Mar Roxas confirmed that he invited Senator Grace Poe to be his vice president in the upcoming elections. Roxas clarified that he had asked Poe to be his running mate even before he was endorsed by P-Noy on July 31.

He said that he will be sending a formal invitation to the Senator, who likewise said she is "always open to meet."

Kilig and gigil are just some of the words we use to express...well, a lot of inexpicable feelings, really! We round up 10 more feelings every Pinoy knows.

If you're itching to get active despite Manila's unpredictable weather, we give you 10 indoor sports places that are perfect for you and your friends!