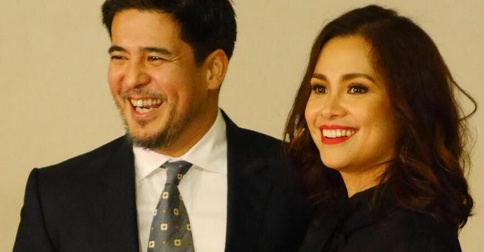 Sherlock Holmes 3, Miss Piggy and Kermit break up, and more.

1. Lea Salonga and Aga Muhlach are reuniting for a new movie

It's finally happening! After months of speculation, Star Cinema's Managing Director Malou Santos confirmed that Lea and Aga will be reuniting in a new movie next year. No plot details have been disclosed, but this is good news for fans of their love team and film, Sana Maulit Muli. Lea earlier said that she had no plans to do a movie this year.

2. Miss Piggy and Kermit are separating

Another Hollywood power couple has called it quits. Miss Piggy and Kermit have gone their separate ways ahead of the premiere of The Muppets TV show. "After careful thought, thoughtful consideration and considerable squabbling, Kermit the Frog and moi have made the difficult decision to terminate our romantic relationship," Miss Piggy said on her Facebook page. "Our personal lives are now distinct and separate, and we will be seeing other people, pigs, frogs, et al."

The revival of The Muppets airs in September.

3. Sherlock Holmes 3 is reportedly in the works

It looks like Sherlock Holmes is going to solve another mystery on the big screen. Lionel Wigram, producer of director Guy Ritchie's Sherlock Holmes films, revealed that a third film is already in the works. They are already working on a script, and both Robert Downey Jr. and Jude Law are "very, very interested" in returning.

Wigram and Ritchie are also collaborating on The Man From U.N.C.L.E., which is slated for release this month.

The Harry Potter spin-off has added some new, famous faces to its cast, including Colin Farrell. He will be playing a wizard that Newt Scamander (Eddie Redmayne) meets in New York. They will be joined by Alison Sudol, Katherine Waterson, and Ezra Miller (who is rumored to be the film's villain).

5. A Taco Bell restaurant also doubled as a meth lab

Breaking Bad IRL? Two men were arrested Tuesday outside a Taco Bell in Iowa after police found the remnants of a meth lab inside the restaurant. One of the men was an employee and has since been fired. Authorities received a tip on "suspicious persons" outside the restaurant. Taco Bell, meanwhile, released a statement that partly said, "Our franchisee has been cooperating with Cedar Rapids Police to investigate this isolated incident."

The restaurant will reopen after it has been sanitized and inspected by the U.S. Health Department.

Typhoon Hanna (international name: Soudelor) will continue to bring rain into some parts of the country as it moves towards the Batanas area. PAGASA weather forecaster Aldczar Aurelio said Hanna will exit the Philippine Area of Responsibility on Saturday. Metro Manila, Palawan, Western Visayas, and Western Mindanao may experience monsoon rains on Friday.

Malaysian Prime Minister Najib Razak confirmed that the debris found on France's Réunion Island in the Indian Ocean is from the missing MH370 plane that disappeared in March 2014. The Malaysia Airlines plane was carrying 239 people and veered off course en route from Kuala Lumpur to Beijing.

Meanwhile, French prosecutor Serge Mackowiak said initial tests showed there were "very strong indications" that it was from flight MH370, but this would only be fully confirmed after further tests set to begin Thursday.

Former senatorial candidate Lito David formally filed on Thursday his quo warranto petition challenging the continued stay of Senator Grace Poe in office. He used P50,000 cash borrowed from friends (whom he called "private individuals") to pay the filing fee. In his complaint, he said Poe has no right to remain in office because she is supposedly not a Filipino citizen and lacked the required number of years of residency in the Philippines when she filed her certificate of candidacy in the 2013 elections. He also said that she is not a natural-born Filipino citizen and has only acquired citizenship status by adoption.

David ran for senator in 2013 alongside Poe, who topped the elections. The latter, meanwhile, said that this was an "opportunity for the truth to come out."

It turns out the folks behind brands like Penshoppe, Oxygen, and Memo, among others have a pretty cool office! We took a peek inside Golden ABC's compound in Quezon City, which features a modern 12-storey structure, mock store displays, and more.

Warning: These are not your lola's sorbetes. We found 10 ice cream flavors that celebrate Pinoy flair, from classic local desserts to daring ulam.