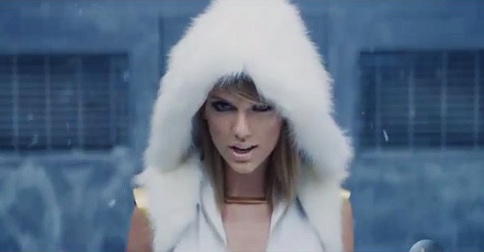 1. This fan-made domino video for Taylor Swift will make your jaw drop

If you thought you were the biggest TSwift fan, think again. A super-fan created an epic Taylor Swift tribute video by documenting her entire discography through the years with thousands of carefully arranged dominoes. Taylor was so impressed, she took to Twitter, saying, "Absolutely floored by these domino skills and really flattered that someone would do this."

2. Angel Locsin to star in new movie alongside Vilma Santos

...sort of. The man who played Martin Luther King Jr. in Selma will be voicing 007 to record the audio book for Trigger Mortis, a new and upcoming James Bond book by Anthony Horowitz. In an interview with The Guardian, he said, "I am officially the only person on planet Earth who can legitimately say: 'I am the new James Bond—even saying that name is the cinematic equivalent of doing the 'to be or not to be' speech."

A black James Bond has yet to hit the movie equivalent, but rumors have said that Idris Elba may take on the role. He has repeatedly denied them, though.

4. The Fresh Prince of Bel-Air is getting a reboot

A new prince is coming to your TV! Will Smith is confirmed to produce a reboot of his '90s show, The Fresh Prince of Bel-Air. The show is still in the early stages of development, but we do know that the story will feature the same plot, but in a modern-day setting.

5. A student has created a real Marauder's Map

A Harvard student named Aran Khanna lost his summer internship at Facebook after he created a Chrome extension that showed your Facebook friends' location, provided they use Facebook Messenger. He named it Marauder's Map (after the fictional location-tracking map in Harry Potter). According to him, he lost his internship for violating the Facebook user agreement when he "scraped the site for data," then offered an unofficial workaround to use the app.

6. Would you try fried milkshakes?

A restaurant owner from Lancashire, U.K. has done the unthinkable: fried milkshakes. John Clarkson, whose restaurant specializes in fried food, invented the "chipshakes" which are milkshake ice cubes that are battered then deep-fried until crispy. Each cube has about 500 calories and comes in strawberry, chocolate, and vanilla flavors.

In a survey conducted by the Makati Business Club, the Office of the Vice President has been ranked the worst-performing government agency due to allegations of corruption. The ranking of Binay’s office plunged down 31 places from last year’s poll to rank last among the 64 government agencies assessed. Other poor agency performances include the Department of Transportation and Communications in 63nd place and the Bureau of Customs in 62nd place.

The Top 3 government offices based on performance are the Bangko Sentral ng Pilipinas in first place, followed by the Philippine Economic Zone Authority, and the Department of Tourism.

According to President Aquino, it's all up to Interior Sec. Mar Roxas to talk to Sen. Grace Poe into running as the Liberal Party's (LP) Vice President. The President clarified that the LP is not running out of time to choose Roxas’ partner. "At the end of the day, the election is still in May and there is plenty of time to introduce whoever the running mate of Secretary Mar [is]," he said.

Puzzle Cafe, located at Blue Ridge, Quezon City, has made international headlines. The cafe, owned and run by the Canoy family, was first established to help one of their members with autism, but has expanded to employ staff who also have autism. They currently have 10 waiters and one kitchen assistant with autism, and are also training others with Down Syndrome.

These 10 characters from our favorite '90s teen shows may be fictional, but the #FriendshipGoals are too real.