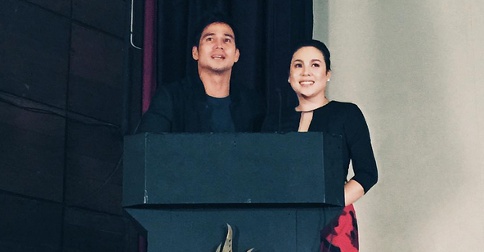 It's been 11 years since we first watched Claudine Barretto tearfully ask, "Mahal mo ba ako dahil kailangan mo ako, o kailangan mo ako kaya mahal mo ako?" The star of Milan reunited on Monday with her leading man, Piolo Pascual, for the premiere of the digitally restored version of their film. Papa P admitted that it was the first time they've gotten together since the movie, while Claudine expressed her openness to work with him again. "Sana [may Milan part two]. If hindi naman puwede, I guess another project will do also. Miss ko na si PJ, super," she said.

2. Cara Delevingne says the modeling industry made her "hate" herself

In an interview, supermodel-turned-actress Cara Delevingne admitted that she is "not doing fashion work anymore." Cara, who started modeling in 2011, said that the industry "didn't make [her] grow at all as a human being" and added, "It is a mental thing as well because if you hate yourself and your body and the way you look, it just gets worse and worse."

She also touched on the times she had to do sexually suggestive poses despite being a teenager, noting that she felt she couldn't say no to them because she was still new. "You start when you are really young and you get subjected to…not great stuff."

3. Fans flock to a McDonald's in Taiwan because of a female employee

An employee at a McDonald's in Taiwan has recently caught the attention of the Internet. The doll-like, "Lolita" facial features of a female cashier named Wei Han Xu or Weiwei prompted a customer and blogger to take photos of her, which soon spread like wildfire. Fans trooped to the McDonald's branch where she works, which didn't please her boss because they would only end up taking photos of her and then leaving without buying anything.

4. Stormtroopers march across Golden Gate Bridge for good cause

A massive group of Stormtroopers were seen marching across the Golden Gate Bridge, but don't be alarmed! These are a bunch of do-gooders.  The Golden Gate Garrison, a Star Wars costuming organization specializing in stormtrooper uniforms, marched in support of Kevin Doyle, a fellow Star Wars fan who lost his wife to pancreatic cancer. Over 50 bounty hunters, Imperial officers, and stormtroopers marched in the fundraiser walk—led by a much nicer Darth Vader.

Thai police officials confirmed the death toll from a blast that hit the Erawan shrine, a popular tourist destination located in one of Bangkok's major intersections. The Palace also promised assistance to all Filipino victims of the blast.

Typhoon Goni (local name: "Ineng") entered the Philippine Area of Responsibility (PAR) just after noon on Tuesday. The storm is expected to enhance the southwest monsoon later in the week, but is unlikely to make landfall in the Philippines.

The Supreme Court on Tuesday voted 8-4 to grant the bail petition of Sen. Juan Ponce Enrile, one of three senators facing graft and plunder charges in connection with the alleged pork barrel scam. No other details in the decision were given, except that Enrile's bail is set at P1 million. Those who dissented were Chief Justice Maria Lourdes Sereno, Senior Associate Justice Antonio Carpio, and Associate Justices Estela Perlas Bernabe and Marvic Leonen.

8. Why is an Obstacle Run That Lets You Relive Martial Law Going to Happen?

Yes, you read that right. Menshealth.ph explains what the heck is The Great LEAN Run and what exactly constitutes an obstacle course that promises participants that they can "relive the Martial Law experience." (Military wall and tear gas obstacles included.)

9. 10 Peri-Peri and Peruvian Chicken Places You Need to Try

Chicken isn't just limited to roasted, Southern-fried, or Pinoy-style. We searched the metro for the best places for you to try piri-piri-spiked Peruvian and Portuguese chicken. Your taste buds will thank us.

If you've always wanted to flaunt a plummy pout but were worried about looking too vampy, we found 10 lipsticks that are perfect for you.