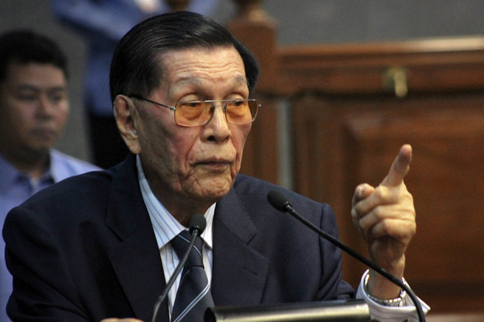 The 91-year-old senator is almost a free man.

(SPOT.ph) On Tuesday, August 18, the Supreme Court granted Sen. Juan Ponce Enrile’s plea for bail posted at P1M, citing his reasons of frail health due to age and voluntary surrender in connection with his graft and plunder cases to the pork barrel scam.

The 91-year-old senator was in the Philippine National Police General Hospital prior to being confined in Makati Medical Center for pneumonia.

The senator’s family is glad to hear the news of his homecoming. His daughter, Katrina, told ANC that they are excited to receive a hug from her father once he arrives.

Meanwhile, other members of the senate supported the bail plea, with 15 of them co-signing a letter in March which urged the court to be ‘compassionate’ as regards to Enrile’s case, to the Third Division antigraft court. They are expecting Enrile to return to work and reassume his position as the house minority leader.

So what’s next for Enrile?

Senators believe that his experience and knowledge will largely contribute to the senate probe on several issues like the Bangsamoro Basic Law and the 2016 national budget deliberations.

In 2013, senators Enrile, Bong Revilla, and Jinggoy Estrada were identified by the Commission on Audit to have received kickbacks from their Priority Development Assistance Fund (PDAF), reportedly helmed by Janet Lim Napoles, also currently detained. Enrile, along with his former chief of staff Gigi Reyes, allegedly received nearly P172 million in kickbacks in the PDAF scam.

Janet Lim Napoles Juan Ponce Enrile Pdaf Scam
Your Guide to Thriving in This Strange New World
Staying
In? What to watch, what to eat, and where to shop from home
OR
Heading
Out? What you need to know to stay safe when heading out