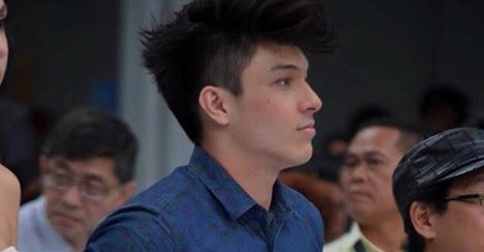 Thanks to a Facebook fanpage, a random, cute guy has gone viral after a post said that he was going to teach Engineering subjects at Adamson University. But don't start trooping to the school just yet! According to a report from PEP.ph, Aidan Calvin Lynch is not an Engineering professor. In fact, he's nowhere near graduating just yet. The 18-year-old is actually a model and a second-year Computer Engineering student at De La Salle-College of Saint Benilde.

The confusion stemmed from an ambush interview at an Adamson University event, where he was asked which school he'd want to teach in, if given the chance. Naturally, he answered Adamson, and added that he would love to be assigned to the Engineering department.

In an interview with PEP.ph, Zoren Legaspi remarked that he believes artistas should be "freelancers." The Marimar actor, who reportedly has always been a freelancer and currently doesn't have a contract with GMA Network, said that networks should be able to share their talents. "Otherwise, ang magsa-suffer niyan, 'yong viewers, na paulit-ulit na lang ang pairing," he explained. "Strong believer ako doon para magkaroon ng iba-ibang klase ng pairing na hindi nakakasawa."

3. Melai to co-host Season 2 of Your Face Sounds Familiar

Your Face Sounds Familiar is headed back to your screens, and they have a new host! Comedienne and Your Face grand winner Melai Cantiveros will be hosting the hit impersonation show alongside Billy Crawford. No specific airing date has been announced, but the show is confirmed to return in September.

First it was the "Sexy Ebola Nurse" and the "Sexy Minion." Now, get ready for the Caitlyn Jenner Halloween costume, supposedly based on her Vanity Fair cover. The costume, which is listed under the "Humorous" category of several online costume suppliers, has already sparked a Change.org petition that said it will prompt people to "make fun of [Caitlyn] and the [transgender] community."

Here's some good news for environmental and conservation activists! A newly discovered reef called the Wilsons Promontory Marine National Park near Melbourne, Australia is said to equal the Great Barrier Reef in terms of its abundant marine ecosystem. Scientists called the reef a "particularly exciting find," as they spotted rare fish species and coral fans and dunes around 30 meters high.

Toronto police are now looking into two suicide reports that have possible ties to the hacking of cheating website, Ashley Madison. Toronto Police Superintendent Bryce Evans said that although details are still scarce, the investigation will focus on finding the hackers responsible for leaking data of over 30 million users.

In an interview, Sen. Alan Peter Cayetano confirmed that he is running for higher office in 2016, but has yet to decide on whether it will be as president or vice president. He added that he is considering running as an independent, depending on the latest surveys. He shot down running alongside Vice President Jejomar Binay due to the latter's alleged corruption issues, but said that he is open to running as DILG Sec. Mar Roxas' Vice President. He said that he will make his announcement in September.

On Tuesday, Bureau of Customs (BOC) Commissioner Alberto Lina said the agency will seek the help of freight forwarders to screen balikbayan boxes after President Aquino instructed them to stop implementing random physical inspection. In a statement, Lina said they will do mandatory X-ray examinations at no additional costs to the sender by asking forwarding companies to install their own machines.

They are also looking to acquire K9 units and additional CCTV cameras to be installed at ports.

We've seen a lot of celebrity weddings this past year so in the spirit of kilig, we round up the 10 sweetest wedding videos that are a mix of romantic, picturesque, and swoon-worthy.

An all-you-can-eat scenario brings out all manner of people. We give you a list of the 10 people you would likely see around a buffet table. Do you see yourself in any of them?