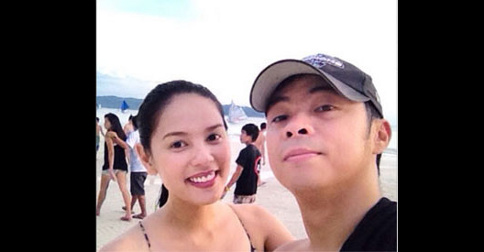 The McWhopper, an odd-even scheme for Manila traffic, and more.

1. Chito Miranda denies Neri Naig was interviewed about her miscarriage

Parokya Ni Edgar frontman Chito Miranda took to Twitter on Wednesday night to deny a report that said his wife, Neri Naig, admitted she had a miscarriage in an interview. He wrote, "Never nagpa-interview si Neri re: her pregnancy. During a presscon for a new show, the reporters were told not to ask about her pregnancy." He then explained that Neri "didn't want to talk about it" but she was still asked about it and "had to answer truthfully because it was the courteous thing to do."

The singer admitted that he was angered at the initial news because it "felt heartless and insensitive."

2. Sandara Park is the new face of Penshoppe

K-Pop superstar Sandara Park is the newest celebrity endorser of local clothing brand, Penshoppe. Both the singer and Penshoppe took to their respective Instagram accounts to make the announcement. Sandara, who is a member of girl group 2NE1, joins the ranks of Ian Somerhalder, Kendall Jenner, Sean O'Pry, and Cara Delevingne as celebrity endorsers.

3. The Mr. Robot season finale has been postponed

If you were hoping to catch the season finale of Mr. Robot, it looks like you'll need to wait a little longer. The USA Network announced that they will not be airing the episode this week, as it contains a graphic scene similar in nature to the shooting in Virginia that happened on Wednesday morning (U.S. time) that left two journalists dead. The network continued, "Out of respect to the victims, their families and colleagues, and our viewers, we are postponing tonight’s episode. Our thoughts go out to all those affected during this difficult time."

The episode will air the following week.

4. Burger King wants to create the "McWhopper" with McDonald's

In a full-page ad that ran on Wednesday in The New York Times, Burger King offered to collaborate with McDonald's to create the "McWhopper." The burger will be a hybrid of the Big Mac and the Whopper that will reportedly be sold for one day at a pop-up store in a yet-to-be-determined U.S. city. McDonald's responded (via Facebook) with an offer to make it a "global effort." Proceeds will benefit the anti-conflict nonprofit group, Peace One Day.

After reports said that a man named Vester Flanagan shot dead two WDBJ7 journalists on live TV in Virginia, ABC News now claims that they have received a 23-page fax from the shooter. He wrote that his anger had been "building steadily" and that he had become "human powder keg" that was "waiting to go BOOM!!!!" Flanagan, who had been dismissed by WDBJ7 and had to be escorted out from the building in 2013, said he suffered racism and homophobia at work. He also said that the June attack in Charleston, South Carolina that killed nine black churchgoers was what "sent [him] over the top."

Meanwhile, President Barack Obama repeated his call for tougher gun laws after the attack. "We're willing to spend trillions of dollars to prevent terrorist activities, but we haven't been willing so far at least to impose some common sense gun safety measures," he said.

According to a report from 24 Oras, a freight forwarder named Ramon Ungco (chairman of Door to Door Consolidators Association of the Philippines) revealed that there was an alleged bribery system at the Bureau of Customs (BOC). They supposedly had to pay corrupt Customs officials around P40,000 to P85,000 for each container that had balikbayan boxes, and that the amount depended on the size of the shipment. He explained that this was done for faster processing of balikbayan boxes in ports.

He also said that he is already expecting public criticism for the proposal.

9. The 10 Things You Need to Pack When You Travel

Planning a quick getaway this long weekend? Consider this your handy checklist for packing. Remember: Traveling light is key!

The next time you're craving some good breakfast fare, we found 10 places that serve up scrumptious waffles. Oh, who are we kidding? We'd have these any time of the day.