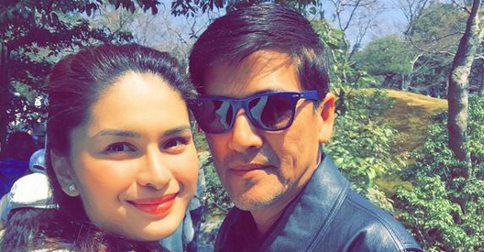 Sixty-one-year-old Vic Sotto confirmed that he and his girlfriend, 26-year-old Pauleen Luna, are officially engaged. He announced the news during a press conference on Wednesday, but didn't divulge the details of their engagement. On Tuesday, Eat Bulaga viewers noticed that Pauleen was wearing a "solitaire ring" on her finger.

2. Pope Francis says priests can forgive women who've had abortion if they have a "contrite heart"

In an announcement Tuesday, the Vatican said Pope Francis will allow Roman Catholic priests to absolve women who have had abortions if "with a contrite heart, [they] seek forgiveness for it" during the upcoming Holy Year of Mercy. "I am well aware of the pressure that has led [women] to this decision," he said. "I know that it is an existential and moral ordeal.”

The #AlDub craze has invaded schools, and now even celebrities are confessing they're fans! Tom Rodriguez admitted that he was a fan of the viral love team, saying, "I like the spontaneity of it. I like that it wasn’t initially planned, it is something that is organically nabuo na lang." He also went as far as to ask Alden Richards if they have a script, and the latter told him that it was all just "bulungan."

Tom, who is a digital artist in his spare time, even said that he has Photoshopped artwork of Lola Nidora, the kontrabida character that Wally Bayola plays in the KalyeSerye.

4. Someone has created a hybrid of McDonald's fries and cheeseburgers

Food blogger Tym Bussanich has made headlines for creating a hybrid of your two favorite things. The crunchy creation, called the McFry, is made of flattened McDonald's cheeseburgers that have been sliced into strips and deep-fried like their famous french fries. Bussanich's Instagram account includes a how-to video so you can make your own.

5. Scientists say 99% of seabirds will have swallowed plastic by 2050

Scientists from Australia's Commonwealth Scientific and Industrial Research Organisation (CSIRO) and Imperial College London have estimated that 90% of seabirds today have plastics in their stomach, and at this rate, will increase to 99% by 2050. Seabirds like albatrosses and penguins often mistake the brightly colored rubbish as food items, and plastics can cause weight loss or even death in animals.

But don't get too excited! This is only happening at McDonald's branches in the U.S...for now. We have our fingers crossed that it will reach our shores; in fact, we're already thinking of all the hash browns and pancakes we'd eat.

7. VP Binay on INC: Protest part of freedom of speech

On Wednesday, Vice President Binay defended his statement on the Iglesia Ni Cristo rally, saying that he wasn't pandering to the politically influential group. According to him, his statement was just a "normal reaction" from a human rights lawyer, saying, "...[ang] pagpo-protesta is part of freedom of speech. Kung may inconvenience, sabi po ng Korte Suprema, ay consequence 'yan ng freedom of speech. But that must have to be accepted, the inconvenience caused, pero meron naman pong constitutional right. (sic)"

9. 10 Best Dishes in Manila for Warming Up This Rainy Season

Whether it's a comforting bowl of soup or hot wings for a much-needed kick, we round up 10 best dishes in Manila that will warm you right up.

The rainy season is the perfect excuse to wear layers! Here are 10 cool jackets for your guy...or you, because you know you'll end up stealing it from his closet, anyway.