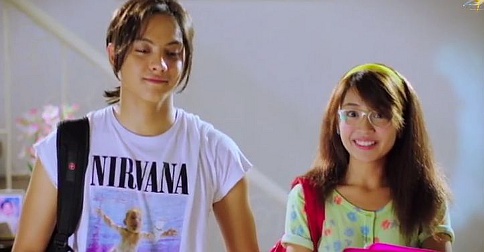 The complete list of this year's FAMAS Awards nominees has finally been revealed. There are a total of 10 nominees for Best Actor, including John Lloyd Cruz for The Trial, Daniel Padilla for She's Dating the Gangster, and Derek Ramsay for English Only, Please. The 10 Best Actress nominees include Jean Garcia for Kamkam, Gretchen Barretto for The Trial, and Kathryn Bernardo for She's Dating the Gangster.

Meanwhile, Best Picture nominees include Feng Shui, Hustisya, Kamkam, Starting Over Again, and The Trial. The Awards Night will be held on September 20.

2. Jao Mapa is returning to showbiz

'90s kids would probably remember Jao Mapa, who rose to fame from his Pepsi-Cola ad and his role in the 1995 teen movie, Pare Ko. He left his acting career in 2000 to complete his college degree. Now, 15 years later, the 39-year-old has returned to showbiz. He is set to star alongside Coco Martin in the highly anticipated telenovela, Ang Probinsyano. In an interview, he said he was open to becoming a "full-time actor again."

3. It’s a girl for Judy Ann Santos and Ryan Agoncillo

On Friday, Judy Ann Santos and Ryan Agoncillo took to their respective Instagram accounts to announce that they are having a baby girl. They will be naming their third child "Juana Luisa" or "Luna." Earlier in June, Ryan announced that his wife was nine weeks pregnant on Eat Bulaga.

Oscar-winning actor Benicio Del Toro has hinted at being part of Star Wars: Episode VIII, telling a radio show that he is expected to start shooting in February or March next year. He also hinted that he would be "like the villain," but clarified that even he didn't know for sure...yet. According to reports, Episode VIII will be written and directed by Rian Johnson.

5. Is Tom Hardy the next James Bond?

Thanks to a recent interview where Daniel Craig said he may not return as James Bond after Spectre, everyone's buzzing about the next actor who should take on 007. While Idris Elba and Homeland actor Damian Lewis are considered frontrunners, another unlikely name has been thrown into the list: Tom Hardy. They join a lengthy list of possible contenders, including Henry Cavill, Dominic West, and Michael Fassbender.

The Department of Science and Technology (DOST) is planning to allow remote areas without Internet connection to access information offline. The DOST has asked Congress for a P1.6-billion budget. "[It will be] a one-way service that transmits static information from the Internet to remote sites, so habang naghihintay ang mga kababayan natin ng actual connectivity, they will already be able to access important information offline such as weather maps and books," explained Usec. Louis Napoleon Casambre.

Senate President Franklin Drilon wants the Liberal Party (LP) to pick a vice presidential running mate for Interior Sec. Mar Roxas soon, as they are running out of time. He also said that the party should stop considering Sen. Grace Poe, explaining, "In my view, Grace Poe is already a candidate for president. The writing is on the wall. She will run."

Starting September 7, the PNP's Highway Patrol Group (HPG) will be assisting in traffic management along EDSA in hopes of easing traffic. HPG spokesman Supt. Oliver Tanseco said 96 officers from the unit will be deployed along the major highway. He added that other than traffic management, the HPG will also have "preventive measures" to stop "kotong cops."

Here's a lovely idea for the weekend! Grab your barkada and have brunch at cozy French bistro Le Jardin. Then again, the setting is romantic enough for your next date, too. Save room for their dark chocolate cake!

10. The Trouble With Balikbayans