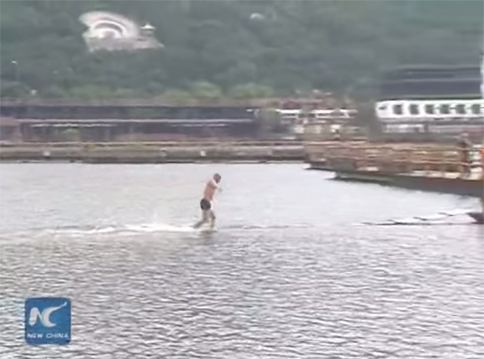 Derek Ramsay's ex-girlfriends, Wall-E and The Martian mashup, and more.

In an attempt to raise money for the education of poor children, Shaolin monk Shi Liliang ran 125 meters across a water reservoir in Quanzhou, China—beating his last year’s record of only 118 meters. But unlike the Biblical passage, Shi Liliang uses a runway of thin boards that float on the water for support.

After a number of attempts on the runway, Shi successfully made it across the reservoir by making small, quick steps and focusing strength on his toes.

In the middle of promoting his recent movie Ex With Benefits with fellow hottie Colleen Garcia, Derek Ramsay revealed on Gandang Gabi Vice the reasons why a past relationship failed. Without dropping names, he admitted he had a relationship with someone who he wishes to never bump into again because “sobra niya akong sinaktan intentionally.”

Moving on to another ex-girlfriend whom he admitted was "the one that got away," Derek only had one thing to say: “I actually broke my own heart for [her]. There was too much turmoil that I had to get out kahit na alam ko na mahal na mahal ko siya.” The girl he was talking about was later on revealed as Solenn Heusaff.

After undergoing surgery for his rotator cuff injury, rumors have spread regarding Manny Pacquiao's supposed retirement. His promoter, Bob Arum, also said in an interview that Pacquiao might be retiring soon if he’s elected as senator of the Philippines.

Pacquiao himself clarified, however, that he has no plans of retiring in the near future.

4. Wall-E and Mark Watney together in The Martian trailer mashup

Thanks to YouTube user Tony D, Mark Watney, portrayed by Matt Damon, becomes Whatn-E in this split-screen mashup trailer of Ridley Scott’s The Martian and Pixar’s 2008 film Wall-E. Thanks to the superior video editing skills and the films’ almost parallel storylines, it's become something audiences want to see as an actual movie.

5. Zelda Williams posts touching message in honor of her father

Robin William’s daughter posted on Instagram a touching message about depression a few days after her father’s death anniversary. Zelda posted a photo of the moonlight along with a statement of support for people suffering from depression and mental health.

An excerpt of the caption says: “Avoiding fear, sadness or anger is not the same thing as being happy […] I know how dark and endless that tunnel can feel, but if happiness seems impossible to find, please hold on to the possibility of hope, faint though it may be.”

Minneapolis dentist Walter Palmer sat down for a joint interview with The Associated Press and the Minneapolis Star Tribune on September 6. “If I had known that the lion had a name and was important to the country or a study, obviously I wouldn’t have taken it,” said Palmer. He also revealed that after taking the shot with his compound bow, the lion didn’t die immediately and even wandered for 40 hours before getting shot by a gun.

He said that the controversy has been especially hard for his immediate family and confided that he doesn’t “understand that level of humanity to come after people not involved at all.”

Meralco’s Joe Zaldarriaga announced Monday morning that the power company will cut P0.57 per kilowatt hour for this month’s generation charge. This means that a household with a 200-kWh consumption could save as much as P114 from their regular monthly electricity bill.

8. Cayetano shaping up to join Roxas in LP tandem for 2016

Despite wanting to run under the Nacionalista Party (NP), Sen. Alan Peter Cayetano said he’s not closing any doors for Liberal Party’s (LP) offer to be Sec. Mar Roxas’ running mate for the upcoming 2016 general elections.

Looking for inspiration for your next (or first) tattoo? Here are 10 celebrities who recently got some new ink.

10. 10 Filipino Social Enterprises That Will Amaze You

Saving the world can be as easy and exciting as going on a shopping spree. We list 10 local businesses that are making their services count.