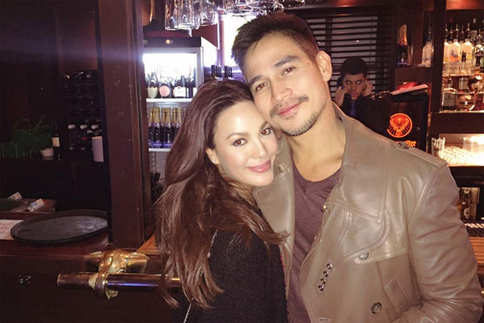 Sam Smith to sing the Spectre theme song, the new iPhone 6, and more.

1. Piolo Pascual and KC Concepcion together again in London

Ex-couple Piolo Pascual and KC Concepcion reportedly made up in London four years after their breakup. This was confirmed after singer Erik Santos posted a photo on Instagram of him, Piolo, and KC with the hashtag that says #lahatngsugatnaghihilom. AdProm head for publicity and media relations Eric John Salut also posted another photo of the twosome with a caption that reads “This made me cry and smile at the same time.”

Piolo and KC are in the U.K. for the ASAP 20 Live in London show.

2. Sam Smith will be singing the Spectre theme song

We can confirm that the Grammy-winning British singer will be singing the theme song for the latest James Bond installment, Spectre. According to Columbia Pictures, Sam Smith recorded "Writing's On The Wall" for the movie, and that the song will debut as a single on September 25.

Mad Men star Jon Hamm is now single after splitting up with his partner of 18 years, Jennifer Westfeldt. Earlier this year, Hamm and Westfeldt denied breakup rumors after the former’s 30-day stint in rehab for alcohol abuse.

There’s no statement yet as to why the couple split up, but the two have said that they “will continue to be supportive of each other in every way possible moving forward.”

The police have yet to confirm the identity of the deceased, but news organizations are already reporting that rapper Dex Osama has died after a shooting broke out between two groups at a strip club in Detroit. The 26-year-old was allegedly shot in the chest and stomach and was pronounced dead at the hospital. Detroit Police later confirmed that a certain 26-year-old male was shot to death outside the club Monday morning.

5. Will the new Apple TV be your next favorite video game console?

Apple will be unveiling a new version of the Apple TV and The New York Times is reporting that the company will be focusing on gaming for the upgrade. Rumor has it that the new Apple TV will come with a game controller connection, and access to the gaming side of Apple’s app store.

“What the Apple TV has the potential to do is bring casual gaming to the living room and make it a much more social activity,” said Jan Dawson, chief analyst at the technology research firm Jackdaw Research.

Along with the new Apple TV, Apple CEO Tim Cook will also be unveiling the iPhone 6S on Wednesday. The new iPhone 6 is said to be faster with a better camera, tougher zinc-reinforced case, and perhaps even a Force Touch screen.

Residents of Pozorrubio in Pangasinan have rescued a serpent eagle who was too weak and couldn’t fly properly. The eagle is currently being taken care of at the provincial environment and natural resources office in the town of Mangatarem, Pangasinan.

President Benigno Aquino III has offered the position of Department of Interior and Local Government secretary to Western Samar Rep. Mel Senen Sarmiento. The Commission on Appointments (COA) has yet to confirm the designation, according to Aquino.

Former DILG Sec. Mar Roxas resigned as the head of DILG in preparation for his presidential campaign for 2016.

10. On the Spot: Alessa Lanot of Life After Breakfast and Mansy Abesamis of Hey Kessy

Crafting is bigger than ever in Manila, and friends Alessa Lanot and Mansy Abesamis are just two of the personalities that are keeping their hands busy by making lots of cool art. We talk to the crafter friends about their creative process, dream collaborations, and more.