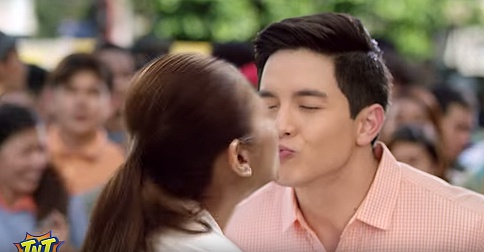 Just days after their first commercial was released, Alden Richards and Maine Mendoza have another endorsement under their belt. The new Talk ‘N Text commercial, which was released Tuesday, features the viral KalyeSerye love team with their trademark Dubsmash and split-screen style. Fans will be especially pleased to know that the ad features an almost kiss between the two.

2. Piolo Pascual has words of advice for fellow stars involved in plane incident

Take it from a guy who has been in the industry for a long time. In an interview with PEP.ph, Piolo Pascual had some valuable advice for the celebrities that were involved in Enrique Gil’s drunken incident on a plane to London. "Bottom line, you have to realize your responsibilities as a personality. You know, we have a social responsibility and we have to be aware of our actions, as simple as that," he said. "Our actions have repercussions."

On Tuesday, Kanye West announced that he will have a surprise Yeezy x Adidas collection that will be shown at New York Fashion Week on September 16. Although this is good news for Kanye and Adidas fans, the previously scheduled designer for the day wasn’t too happy. Anna Bowen, a luxury brand designer, had to move her show to September 17. "We have been frantically calling models, the venue, press, etc. about the change, while I am putting finishing touches on my collection. It’s been a nightmare," she said.

4. Brad Bird gives an update on The Incredibles 2

In an interview, writer and director Brad Bird is finally giving fans an update on the upcoming sequel to Disney-Pixar’s The Incredibles. He said he already has the story arc and is "three-quarters through the script." With the recent influx of superhero movies, Bird said they are determined not to "trot over the same turf in the same way everyone is." Instead, they will be focusing on the film’s characters and relationships.

5. Air India grounds 125 cabin crew who were deemed "too fat"

According to a report, Air India is set to "ground" 125 cabin crew members after they failed to reach the "adequate BMI." This comes after 600 crew members were earlier told to get in shape over the course of six months last year. The airline insisted that the decision to relegate them to ground duties was not about appearance, but safety. This was done to supposedly ensure cabin crew members could "function well" in times of emergency.

The Liberal Party’s (LP) presidential bet Mar Roxas told reporters Tuesday that he is currently asking Camarines Sur Rep. Leni Robredo to be his running mate. On Monday, Robredo was quoted saying that running for Vice President is "too much too soon." She also said that she will only run if she is convinced that no one else can do the job.

According to reports, Maynilad consumers will be paying higher water bills this October. On Monday, Maynilad announced that they will be increasing rates for customers residing in Manila, Quezon City, Makati, Caloocan, Pasay, Parañaque, Las Piñas, Muntinlupa, and other service areas. Depending on how much water a household consumes, rates will increase up to P2.80. The new rates take effect from October 1 to December 31.

Former Senator Francis "Kiko" Pangilinan has resigned from his Cabinet post effective September 30. The former Presidential Assistant for Food Security and Agricultural Modernization reportedly left his post to seek another term in the Senate.

Filipinos love Japanese food, whether it's a satisfying plate of yakitori or tempura. We show you where to go when you're looking for that Japanese food fix.

A first date is one of those ultimate, make-it-or-break-it situations for men. When they finally get the girl to say yes, here are the 10 things that will probably run through their heads.