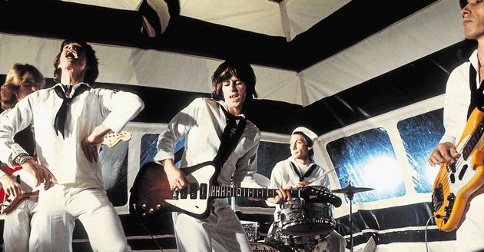 1. Keith Richards confirms a new album for The Rolling Stones

Great news, music fans! Keith Richards announced that a new album for the Stones is coming in 2016. Richards confirmed that the band has "definite plans" to record a new album after they finish their South America tour in early 2016. Their last studio album, A Bigger Bang, was released in 2005.

Coco Martin, who stars in the TV adaptation of the FPJ movie Ang Probinsyano, said that he remains undecided on whether to endorse presidential candidate Sen. Grace Poe. He said that it was still too early to make a decision and stressed that there was no political agenda behind his new project. He added, however, that should the senator ask for his help, he wanted to know her political platform.

3. Sarah Carlos hurt by bashers over role in Pangako Sa 'Yo

Pangako Sa 'Yo's Sarah Carlos may be a showbiz newbie, but that didn't spare her from the harsh comments of overzealous KathNiel fans. She said that she tries to understand where they were coming from, saying, "As much as possible, I try not to get affected by them but of course I'm only human, I have my weak points." In the interview, she also thanked her supporters, adding, "I'm very, very, thankful for them na sometimes nakakaiyak how they defend me and support me."

Sarah bagged the role of Bea Bianca, the third party in the Angelo-Yna love triangle.

A 14-year-old Muslim student named Ahmed Mohamed was arrested when a teacher in his school mistook a homemade clock that he built as a bomb. His case was closed and dropped on Wednesday when the local police department found no evidence of "intent to create harm." President Obama tweeted a message of support to the Texan student, saying, "Cool clock, Ahmed. Want to bring it to the White House? We should inspire more kids like you to like science. It's what makes America great."

5. Number of fish in the sea has dropped by nearly half since 1970

According to a recent report from the World Wildlife Fund (WWF) and the Zoological Society of London (ZSL), the number of marine species has been almost halved since 1970. Reports say that between the years 1970 and 2012, numbers have sunk by up to 49%, possibly due to overfishing and climate change.

On Thursday, President Benigno Aquino III concluded that there is no doubt that it was the Philippine National Police-Special Action Force (PNP-SAF) who killed Malaysian terrorist Zulkifli bin Hir a.k.a. Marwan in the January 25 Mamasapano operation in Maguindanao. He called other versions “baseless” and put these to rest, and showed photographs of a lifeless Marwan, among other evidence gathered from the operations.

According to the Social Weather Stations (SWS), President Benigno Aquino III hit his highest public satisfaction scores in one-and-a-half years. The third-quarter results show a net satisfaction score of a ''good'' +41, which is 11 points higher than last quarter. ''Indeed the country's journey along Daang Matuwid has come a long way, going into the last nine months of the President's term—and bodes well for the country's future," said Secretary Herminio Coloma Jr.

It might be hard to believe now, but there was once a time when Manila was called the "Paris of Asia." Take a look back at the beauty of Manila's old buildings that have completely vanished over the years.

10. 10 Things That Go Through Your Head on Your First Day at a New Job

Your first day at a new job feels like the first day of school. We list the things that go through your head, like deciding where to get lunch.