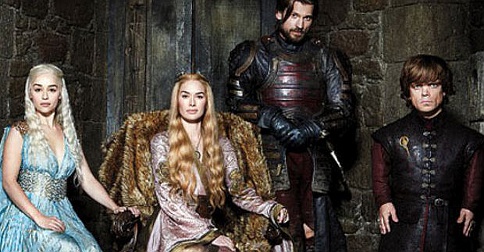 Roxas overtakes Binay in latest poll, the winners of the FAMAS Awards, and more.

1. Game of Thrones wins big at the 2015 Primetime Emmy Awards

Toni Gonzaga was one of the big winners at Sunday night's 63rd FAMAS Awards, taking home the trophy for Best Actress in the movie, Starting Over Again. Allen Dizon won Best Actor for his performance in Magkakabaung. Sarah Geronimo, meanwhile, joined the likes of Gloria Romero and Nora Aunor as the youngest recipient of the Iconic Movie Queen of Philippine Cinema Award. As for Best Picture, MMFF 2014 entry Bonifacio: Ang Unang Pangulo took home the title.

The 86-year-old also said that he would continue working in the industry as long as his health allows him.

4. Menudo to stage reunion concert at the Big Dome on December 15

Heads up, '80s boy band fans! Puerto Rican band Menudo is having a reunion concert at the Smart Araneta Colliseum on December 15. Unfortunately, Ricky Martin won't be around, but fans will get to see Charlie Masso, Robert Avellanet, Ray Reyes, Rene Farrait, and Miguel Cancel in the flesh.

First, there were the questionable Minions and Cecil the Lion's killer costumes. Now, there is a new Halloween costume that would probably raise more eyebrows. Costume maker Yandy has introduced a "sexy" Donald Trump costume for women, which includes a red tie, blazer, and booty shorts. Other "sexy" costumes from the shop include George Washington and the woolly mammoth.

Dubsmash isn’t the only way to get famous nowadays. Fitstagramming, or Instagram-ing your six-pack and healthy lifestyle can do that for you as well in the same way that YouTube brews famous singers into stars.

One such example is Joe Former, who used to be a personal trainer and now has a two-year contract to make four cookbooks. He says he started off just posting his fitness routinees for clients and friends, but now he has about 462,000 followers on Instagram.

In an interview with ANC on Monday, September 21, Sen. Francis “Chiz” Escudero defended his running mate, Sen. Grace Poe, from criticism regarding her experience and competence to be running for president, even calling her “ambisyosa.” Escudero then said there is nothing wrong with being ambitious. He then diverted the topic to former DILG Sec. Mar Roxas being more experienced than P-Noy when he ran for president, and how that didn’t seem to be an issue for LP back then. "I think what's good for LP or P-Noy in 2010 should be good also for Grace at this point in time," the senator said.

Presidential hopeful Mar Roxas rose 18 points to land second place in the latest Social Weather Stations' survey, with 39% compared to June's 21%. Vice President Jejomar Binay, on the other hand, slipped to third place with 35%. Sen. Grace Poe remains in the lead with 47%, five points higher than her results during the second quarter. She also remains the top choice for vice president with 25%.

9. It's Showtime fans ask Vice Ganda to bring the "old" show back

Not everyone is very happy with the noon-time show's new format. People are said to be getting tired of Pastillas Girl's exposure all through out the show. There are still loyal It's Showtime fans, however, who continue to support and defend the program.

We all know the never-ending struggle of traffic in Manila. We've compiled 10 proposed solutions to the traffic problem from the government that might just put an end to all traffic woes. Or not.