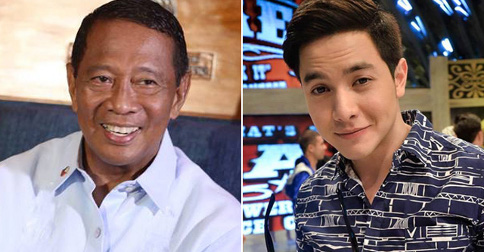 New ABS-CBN shows, a fight over Nutella, and more.

1. VP Binay wants Alden Richards to portray him in a biopic

When asked about which celebrities he wished to be part of his campaign, he replied "Sana si AlDub." But according to Sen. Tito Sotto, the viral love team will not be seen in any political campaigns in 2016.

She also denied rumors that she was being used by other presidential candidates to discredit Poe. "I’m not here for anybody’s game [or] for somebody’s political agenda or career," she said.

The Kapamilya network has unveiled a new roster of shows that fans can look forward to. Other than Coco Martin's Ang Probinsyano, ABS-CBN will be launching five new shows, including one game show that will be hosted by Billy Crawford. Real-life lovers Daniel Matsunaga and Erich Gonzales will have their own drama called Be My Lady, while teen stars Inigo Pascual and Julia Barretto will have a show entitled And I Love You So.

Awesome news for all Potterheads! J.K. Rowling’s website Pottermore has undergone upgrading AND has published a new Potter family history! The fansite has been revamped with Rowling’s own writing, plus some coverage of the latest news on your favorite boy wizard. This includes updates on the upcoming film Fantastic Beasts and Where to Find Them, and the West End stage play, Harry Potter and the Cursed Child.

A 24-year-old man from Burbank, California was charged with elderly abuse after he punched a 78-year-old shopper. The bizarre reason? The latter accused him of taking too many Nutella samples. The elderly man was hospitalized and if the younger man is convicted, he could face over a decade in prison.

6. To celebrate every woman, the cover of ELLE Australia is...you!

You read that right, because the cover of ELLE Australia’s October issue is a mirror (or mirror-like material). "This month ELLE celebrates the incredible complexity of womanhood with a ground-breaking portrait exploring the hopes, dreams and challenges of being an Australian woman and girl in 2015," according to the mag's Facebook page. Using the hashtag #BeTheCover, ELLE Australia encourages readers to take their front cover selfies and post it on social media.

If the presidential elections were held today, the fight would be very tight, according to a Businessworld-SWS survey. The findings reveal 26% would vote for Sen. Grace Poe, 24% for Vice President Jejomar Binay, and 20% for former DILG Sec. Mar Roxas. These numbers are statistically tied, according to analysts. Also on the list are Davao City Mayor Rodrigo Duterte, Sen. Bongbong Marcos, Sen. Francis Escudero, Manila Mayor Joseph Estrada, Sen. Miriam Defensor Santiago, and former Sen. Manny Villar.

8. Comelec says there will be no Internet voting in 2016

The possibility of conducting Internet voting for the 2016 presidential elections has been dismissed by the Commission on Elections (COMELEC). On Wednesday, Commissioner Arthur Lim said, "Personally, I favor Internet voting, but unfortunately, our laws at present do not allow it." There are two pending bills in the Congress regarding Internet voting but current preparations are already set for automation and a lot of technical issues, specifically regarding security,  would need to be addressed first.

9. 10 Friends Quotes You Can Use in Life

Twenty-one years: that’s how long the TV show Friends has been our #FriendshipGoals. We look back on some of our favorite episodes and list 10 timeless quotes from the show that you can use in life.

Take a peek inside Ace Saatchi & Saatchi's airy and colorful office, which features high ceilings, an open and integrated space, and plenty of natural light.