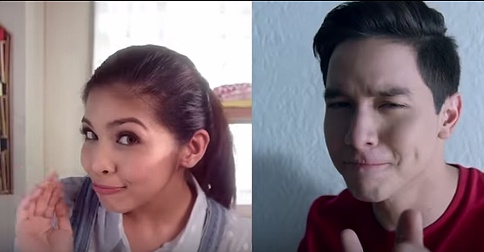 1. #AlDub's extended McDo commercial is too cute for words

2. DongYan announce the name of their baby girl

Marian Rivera and Dingdong Dantes have officially announced the name of their baby girl: Maria Letizia, named after Dingdong's grandmother and Marian's aunt who are both named Leticia. The couple made the announcement during their baby shower over the weekend. Marian is expected to give birth in November.

Saturday was a huge day for noontime rivals Eat Bulaga and It's Showtime. The former launched National Pabebe Wave Day to commemorate Alden Richards' first visit to Yaya Dub's home. The latter, meanwhile, celebrated their sixth anniversary with a live show at the Araneta Coliseum, and featured three of their biggest love teams (KathNiel, LizQuen, and JaDine).

GMA 7's show dominated the timeslot with a staggering 45.7% rating compared to It's Showtime's 11.9% rating. As for Twitter, Eat Bulaga amassed a total of 25.6 million tweets while It's Showtime earned 6.3 million.

If you have the funds to really, really splurge, head to Image Luxury Nail Lounge in Orange County, California. Their diamond manicure costs between U.S. $10,000 to U.S. $25,000, depending on what type of diamond you pick. The shop will be exclusively open for patrons with a lot of money to burn, and their pampering includes champagne, a massage, a facial, a makeover, and a selection of diamonds to choose from.

5. This guy set fire to a gas station just to kill a spider

We understand the fear of spiders, but this guy just took it to another level. A man at a gas station tried to kill a spider by burning it with a lighter, but forgot that gasoline is flammable. The result? He ended up setting the station on fire, but he managed to escape without injury and the fire was promptly put out. No word yet on whether he successfully killed the spider or not.

Passengers of the MRT can now purchase the new "beep" cards at five stations, namely: North Avenue, Cubao, Shaw Boulevard, Ayala, and Taft Avenue stations. Cards are sold at P100 with a load of P80. (The remaining P20 counts as the card fee.) This new stored value card can be used for four years upon purchase, and the new ticketing system will be rolled out in all stations starting October 3.

Sen. Vicente Sotto III, former Sen. Panfilo Lacson, and Sen. Ferdinand Marcos Jr. have topped the latest Pulse Asia survey for the 2016 Senate race. The survey said 63.6% would vote for Sotto if the May 2016 elections were held during the survey period, 59.3% for Lacson, and 54.9% for Marcos.

You've probably seen a pedicab or a tricycle straying onto EDSA at some point, but it looks like the Philippine National Police-Highway Patrol Group (PNP-HPG) is putting its foot down. According to the enforcers, tricycles and pedicabs should only be using inner streets and the ban will be strictly enforced.

9. 10 Best Things We Ate in September

We bid a fond farewell to September with a roundup of the best dishes we ate this month. In this list, savory churros, fluffy waffles, and more.

10. 10 LSS-Worthy Anthems for When You're Stuck in Traffic

When things are looking bleak and it feels like you're (literally) going nowhere, pass the time and lift your spirits with these 10 LSS-worthy traffic jams.