This man's proposal with a customized Monopoly board will melt your heart + more things you might have missed today
Loading
Already a member? Log in
No account yet? Create Account
Spot.ph is your one-stop urban lifestyle guide to the best of Manila. 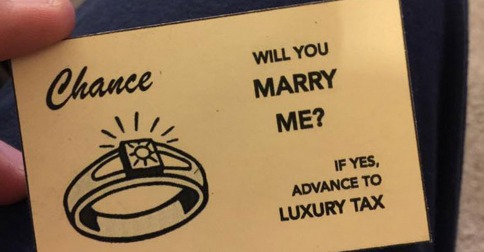 MMDA Chief Tolentino to run for senate, updates on the Facebook copyright, and more.

1. This man's proposal with a customized Monopoly board will melt your heart

This man has just upped the ante for proposals everywhere. Justin Lebon commissioned the help of a friend to create a fully customized Monopoly board to propose to his girlfriend, who loves the board game. The game's properties correspond with real places Justin and his girlfriend have visited or lived in. He initially presented the game as a Christmas present and it wasn't until she played with a special weighted dice that she drew the card with the proposal.

In a press conference, Jericho Rosales revealed that he doesn't mind being "second choice" for the lead role in the upcoming MMFF movie, Walang Forever. "As long as my projects are fit para sa akin, [and] I know that I can do a [good] job playing the role, okay lang," he said. "Like sa Bridges of Love, hindi naman ako 'yong first choice." (The role was initially Xian Lim's.)

The role in Walang Forever was initially JM de Guzman's, but he was reportedly pulled out due to alleged personal issues. When asked about the reason for JM's departure, Jericho replied, "I know that JM is very busy. He's doing a soap [All of Me]."

Weeks after making headlines for her alleged drunken behavior at the recent Star Magic Ball, Ellen Adarna is now breaking her silence. In an interview on Tonight with Boy Abunda, she admitted that she had a few drinks but stressed, "Basta hindi ako wasak na wasak. Nakainom lang." She also denied reports that said she deserted her date and love team, Ejay Falcon, for Paulo Avelino.

While she admitted that she held Paulo's hand because of her aching feet, she denied flirting with him. "I'm actually dating someone right now. He’s non-showbiz," she said. "For me, wala naman akong ginawang mali kasi wala naman akong sinaktang tao. I was there to have fun because it was a party."

You probably noticed a couple of your Facebook friends recently posting a legal notice forbidding the website to "disclose, copy, [or] distribute" the content of users' profiles. On their official account, Facebook warned users "not to believe everything they read" and called the legal notice a hoax.

Here's something we really, really hope makes its way to the Philippines. Oreo has unveiled its newest flavor—cinnamon bun! It's still unclear whether the new flavor will have a limited edition run, but it will join the ranks of other unusual flavors like pumpkin spice, marshmallow crispy, and red velvet.

Images taken from the Mars orbit revealed that liquid water runs down canyons and crater walls over the summer months on Mars, and scientists say the discovery raises the chances of Mars being home to some form of life. The water dries up in autumn when surface temperatures drop. Researchers still don't know where the water comes from, but it may rise up from underground ice or condense out of the thin Martian atmosphere.

Metropolitan Manila Development Authority (MMDA) Chief Francis Tolentino has announced that he will be joining the 2016 senatorial race. Tolentino said he has received the blessings of President Aquino, and will be running under the ruling Liberal Party (LP). The MMDA chief, a former Tagaytay City mayor, said 23 mayors, seven congressmen, and 23 vice mayors from Cavite are backing his candidacy.

A resolution has been passed at the Metro Manila Council Meeting for the initiative, and Gunnacao recommends that the road clearing start this month.

Comfort food is awesome, but there are days when you just need an extra pick-me-up. This is where these 10 dishes come in...perfect for your next emergency situation when you need to eat your feelings.

10. 10 Things You Wouldn't Want to Hear When You Have Your Period

Despite everyone already knowing that women suffer through a bloody week every month, some people still don't get it. Here are the 10 things we don't want to hear during that time of the month.