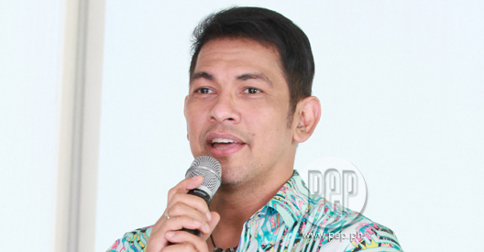 A butt-shaped lamp, Cayetano bats for Duterte, and more.

In an interview on Tonight with Boy Abunda, Gary Valenciano revealed his feelings on his son, Gab's earlier Facebook post that said showbiz made him feel "worthless." He admitted that he felt partially responsible for Gab's sentiments, saying, "I know I played a fault at that. Siyempre as Gary Valenciano, as his father, there are things that I could have done para maiwasan 'yon."

He added, "I always told him, Gabriel, 'I don't expect you to talk, walk, sing, dress-up, sing like me, dance like me. You have your own set of wings, use those wings to fly. I'll fly with you but I will not fly for you."

When asked about her reaction to JM's sudden departure, she admitted she was saddened because they apparently went way back. "I think wala naman ako sa position para magsalita kung ano ba ang nangyari," she said. JM was replaced  by Jericho Rosales.

3. Pastillas Girl's mom denies that she is "pimping" her daughter on It's Showtime

Here's a great gag gift for a friend. Slap It is a new lamp that is shaped like a human derriere...but that's not even the fun part. In order to switch the light on, you have to slap, pinch or squeeze the butt. Each butt can also light up in 10 different colors...just in case you get bored of it.

5. The Eiffel Tower turns pink for a good cause

On Monday, the Eiffel Tower lit up to a rosy pink to symbolize support for Breast Cancer Awareness Month and Pink October, a month-long campaign against breast cancer. The Eiffel Tower isn't the only landmark participating for Pink October; the Cape Byron Lighthouse in New South Wales, Australia will also be joining in.

On Wednesday, Sen. Cayetano said that he and his "entire family" are backing calls for Davao City Mayor Rodrigo Duterte to run for president in 2016. He also noted that he and Duterte share the "same core values." In the same interview, he confirmed that he will not be running as vice president to Mar Roxas "due to difference on opinion" on some issues.

Sen. Tito Sotto said the AlDub phenomenon boosted his ratings in a recent senatorial preference survey by Pulse Asia, which he topped with 63.6%. He added, "I'd like to think that my 100-percent perfect attendance and participation in most Senate debates is also a factor."

Four Ninoy Aquino International Airport X-ray screeners were suspended from their post after complaints of extortion by allegedly planting bullets in passengers' baggage. According to the Office of Transportation Security, 3,325 bullets were found in passengers' baggage at NAIA from January to August 2015.

Sam Smith just released his theme song for the upcoming James Bond film, Spectre, so we decided to look back at the 10 most unforgettable songs from the franchise.

Face masks are perfect for stressful, pick-me-up days when all you want to do is relax. Here are 10 must-try face masks that will keep your skin fresh and hydrated. Bye-bye stress!