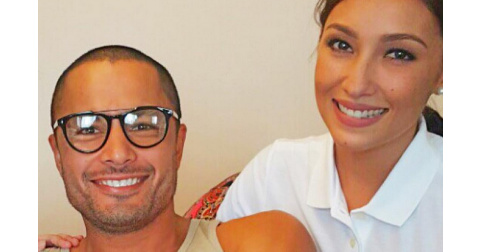 No, we don't mean they're dating again. The two are reuniting on the big screen for an upcoming romance flick entitled Love is Blind. In an interview, Derek said that he broke his own heart when he called it quits with Solenn, explaining, "Parang may nangyayari sa relationship na I guess, sobra kayong nagmamahalan, sometimes you bring the worst out of each other. For me, it was too much turmoil, I had to get out."

The two dated for four years before they both made it big in showbiz.

3. Ed Sheeran isn't writing a song for One Direction's album

In an interview with MTV, British crooner Ed Sheeran said that he will no longer be collaborating with One Direction. He explained, "They don’t really need as much help anymore. They can kind of do their own thing." Ed has written a handful of hit songs for the boy band, including "Little Things," "Over Again," and "Moments."

4. Would you try caffeinated peanut butter?

Here's something that's sure to jolt you awake. A company called Steem has created caffeinated peanut butter, but that's not even the craziest part. Each jar contains the caffeine equivalent of two-and-a-half cups of espresso in just two tablespoons. (We're already palpitating at the thought.) The product reportedly tastes like normal peanut butter.

Love weddings and the gowns that come with them? You'll love this video that traces the gorgeous styles of wedding gowns from 1915 to today. Who knows, maybe you'll even be inspired to wear a vintage design for your wedding!

According to Communications Sec. Herminio Coloma Jr., the Department of Education will be checking with curriculum supervisors and teachers on the supposed "deficiency" of Filipino students about Philippine history. He also said that DepEd Sec. Brother Armin Luistro has assured the public that the lives of Filipino heroes like Apolinario Mabini are adequately taught in school.

Earlier, President Aquino expressed concern after reports that said some students asked why Mabini in Heneral Luna was always seated.

In an interview on Thursday, Sen. Loren Legarda said the Senate Electoral Tribunal (SET) will release its ruling on Sen. Grace Poe's citizenship case by early November. Legarda is part of the SET but refused to further comment on Poe's case. "It’s better left to the discretion of the tribunal when we make our final decision," she said.

According to community-based traffic and navigation app Waze, Metro Manila reportedly has the worst traffic on Earth. The survey also places Manila among the cities with the "worst roads to drive on" because of the "frequency and severity" of traffic jams and poor road infrastructure. Other countries on the list include Rio de Janeiro and Sao Paulo in Brazil, and Jakarta in Indonesia. The evaluation was made through 50 million users in 32 countries and 167 metro areas.

9. 10 Most Common Phobias in Manila

It seems as though there's a phobia for practically everything. When you're living in a place as hectic as Manila, here are 10 phobias you'll probably see.

10. Reading with Taste: 10 Essential Books for the Self-Proclaimed Food Nerd

There's more to food literature than just cookbooks! Here are 10 unique and creative books that will help fuel your love for all things food-related.