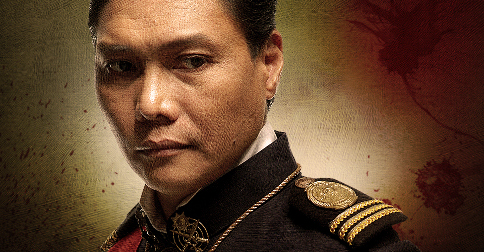 Doctor Who for an older crowd, Mar condemns degrading dance at LP event, and more.

In an interview with ABS-CBN, Mon Confiado said that he is confirmed to return as Emilio Aguinaldo, should the film production unit Artikulo Uno push through with their planned historical trilogy. "After [ng Heneral Luna] ay Gregorio del Pilar. And after that, Manuel L. Quezon. At ang common denominator ng trilogy ay si Aguinaldo," he explained. Earlier, producer Joji Villanueva Alonso said that they need about P27.6 million more to reach the "breakeven point of P200 million." Their earnings will then be used for the trilogy.

3. Doctor Who to have spin-off for teens

Here's some awesome news for Whovians! Doctor Who is getting an eight-episode spin-off aimed at young adult viewers. The series, entitled Class, will be set in a school in present-day London, and will be written by author Patrick Ness. Doctor Who writer and showrunner Steven Moffat will be an executive producer on the new show that is slated to hit TV screens in 2016.

Nicholas Brendon, who is best known for his role as Xander in Buffy the Vampire Slayer, has been arrested for domestic disturbance. His 33-year-old girlfriend told police that she met up with Nicholas to return his belongings, but he reportedly threw his phone at her, grabbed her by the throat, and began choking her. The actor faces charges for one count of robbery in the third degree, two for criminal mischief, and another for "obstruction of breathing." He was released from jail a day later after posting bail.

5. Now you can chug your champagne with a "chambong"

Someone has invented a new device that will make you forget how classy champagne is supposed to be. The "Chambong" is a contraption that is basically like a champagne glass but with a glass straw replacing the stem. This allows drinkers to chug their bubbly drink faster. But hey, why limit yourself to just champagne? Daring drinkers can even use it for tequila.

6. The Oregon tragedy is the 264th mass shooting in the U.S. this year

A mass shooting at Umpqua Community College in Oregon marks the 264th shooting incident in America this year (according to the website Gun Violence Archive). The rampage killed at least 10 people and injured 20 more. A separate report from CNN said that the gunman specifically targeted Christians. The tragedy led to Obama's fiercest speech on gun violence yet.

According to PAGASA, tropical storm Kabayan is expected to leave the Philippine Area of Responsibility (PAR) by October 3, Saturday afternoon. The state weather bureau lifted all storm signals in the country on Friday, October 2, as the storm headed towards the West Philippine Sea. However, they still cautioned the public against heavy rain in the storm's wake.

There's more to Instagram's eye candy than just food or celebrity posts. Here are 10 Filipino artists on Instagram that will give you a dose of culture and inspire you to get creative.

While we can appreciate an acoustic cover every now and then, we will always love versions that have a new and unexpected take on the original. Here are 10 recent cover songs that will blow your mind.