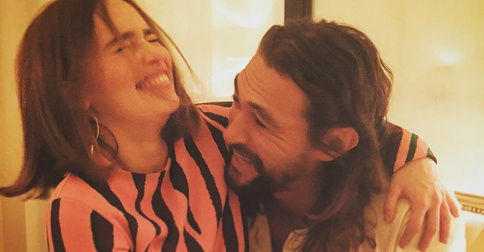 It looks like not even Khal Drogo's untimely death in Season 1 could keep them apart. Game of Thrones actors Jason Momoa and Emilia Clarke, who play fan-favorite couple Khal Drogo and Daenerys Targaryen (a.k.a. Khaleesi), reunited in real life during Paris Fashion Week. It's the closest thing fans can get to closure, with the two actors posting photos from the event on their Instagram accounts.

It looks like we can add Kris Aquino to our list of unlikely celebrity fans of AlDub. In an Instagram comment, Kris replied to a user who asked her if she watched the love team on Eat Bulaga. She said she has seen them on the show four times, and said that she previously met Maine Mendoza in an event back when the latter was still impersonating the former on Dubsmash. She also shared that she met Alden Richards in 2013 in the EB studio and added, "Mabait siya so [he's] deserving of his success."

She was quick to add, however, that she still "super loves" her best friend and AlDub competitor, Vice Ganda.

3. A Nancy Drew series is already in the works

Rejoice, YA fans! Your favorite girl detective is coming to TV and she's going to be much older. CBS is currently developing a contemporary drama based on Nancy Drew who will now be in her 30s and working as a detective for the NYPD. The show has yet to announce who will play the character, but it already sounds promising.

4. Barbie gets a punk rock makeover from legendary makeup artist

Legendary make-up artist Pat McGrath collaborated with @BarbieStyle (Barbie’s official Instagram account) to come up with four brand new makeup looks for the doll for Paris Fashion Week. These four looks include Swarovski crystals, a punk rock makeover, heavy blue and yellow eyes, and a Versace inspiration that will be posted tomorrow. Barbie has been "documenting" her travels and jetsetter fashion for millions of her followers on Instagram. She was recently in New York, London, and Paris Fashion Week before her makeovers.

The highly anticipated return of Richard Gomez and Dawn Zulueta to TV is inching closer. ABS-CBN has finally released the trailer to their new show, You're My Home, which also stars Jessy Mendiola and JC De Vera. The family drama was first announced in 2013 and originally featured Enchong Dee and Shaina Magdayao. So far, no release date has been announced.

6. A menstrual cup reports your flow to your phone

Looncup is a Bluetooth-connected menstrual cup that sends reports about the fluid volume and color of your, ahem, monthly visit to your smartphone (if you want to know that sort of thing). The cup is reportedly more environment-friendly, but pricier compared to tampons or pads. The silicone cup comes with a sensor, battery, and a Bluetooth antenna that can send push notifications to your device and let you know how full it is or when you need to change it. You can also compare monthly data. However, it only comes in one size and the retail price has yet to be finalized.

On Monday, Governor Jerry Brown signed a bill legalizing euthanasia in California. This makes California the fifth U.S. state to allow mercy killing, after Montana, Oregon, Washington and Vermont. The governor said that before he made the decision, he consulted members of the Catholic Church, who were opposed to the procedure, as well as physicians. "I do not know what I would do if I were dying in prolonged and excruciating pain," Brown said. "I am certain, however, that it would be a comfort to be able to consider the options afforded by this bill. And I wouldn't deny that right to others."

8. Ayala Bridge to close to traffic for four weekends

According to the Department of Public Works and Highways (DPWH), the Ayala Bridge will be closed for four weekends starting October 9 for construction and improvements. During weekdays, one outer lane in each direction would be open for light vehicles, and additional lanes may be opened starting October 16 as work on the bridge continues. The bridge is expected to be fully open by November 2.

Sometimes you just need to let loose. Guilt aside, allow yourself to succumb to the call of scrumptious and mouthwatering dishes.

10. 10 Inspiring Illustrators You Should Know Now

If you need a daily dose of art or maybe some inspiration for your own creativity, keep these 10 illustrators on your radar.