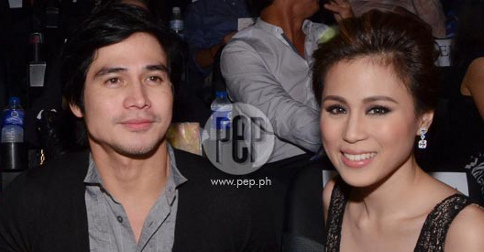 A new Twilight book, a real-life Iron Man, and more.

1. Piolo Pascual and Toni Gonzaga reunite for a new show

Think of it as a reunion for your favorite love teams. An upcoming romance series entitled Written in Our Stars will star Piolo Pascual, Toni Gonzaga, Sam Milby, Jolina Magdangal, and Sarah Lahbati. According to an earlier report, Toni described the series as  "wholesome, family-oriented and full of moral values." No release date has been announced.

Earlier, Sharon was quoted saying she was a "little offended" she wasn't included in the list.

3. Piolo Pascual to endorse a presidentiable in 2016 elections

In a press conference, Piolo Pascual admitted that he will be endorsing a presidential bet in 2016, but has yet to choose among the candidates. "It will define the next six years of the Philippines, economy-wise, and it's important for us to know who are we gonna vote for," he explained. "So I've been doing dinners with different politicians, so I would know kung ano ang mga plataporma nila and kung sino ang ikakampanya natin." He added that he wanted to use his influence to compaign "for the right person."

When asked if he had any plans to enter politics, he quickly shot the idea down. "Ayoko, mas maganda na 'yong plataporma natin sa [showbiz], you know, we can help in our own little way." he said. "At saka masyadong magulo, wala yata sa plano ko, sa pangarap kong maging pulitiko."

It seems that the Kardashians prefer announcing major life changes via magazine covers. First there was Caitlyn’s transformation, then Khloe showed off her new fit body, and finally there’s Kylie’s raunchy entry into legal age. This time, Kourtney takes the spotlight with her nude Vanity Fair cover, printed in metallic paper and photographed by Bowen Smith. This is her first solo photoshoot after she and her longtime boyfriend Scott Disick called it quits. The images can also be viewed from October 22 to November 19 at De Re Gallery in Los Angeles or on Vanity Fair’s website.

5. A new Twilight book has been released but there's a twist

Author Stephanie Meyer announced Wednesday that she will be releasing a new Twilight book to celebrate its 10th anniversary. Life and Death: Twilight Reimagined swaps the genders of almost all its characters, including Bella who is now Beau, Edward who is now Edythe, and Jacob as Julie. "[Bella] has also been criticized for being too consumed with her love interest, as if that's somehow just a girl thing," she explained. "I’ve always maintained that it would have made no difference if the human were male and vampire female—it’s still the same story."

She also shot down the possibility of a movie, saying she didn't really see it happening.

This morning, Umagang Kay Ganda featured Ruben Austria Sr., a pedicab driver from Barangay Guadalupe, Cebu City, who wears a suit and tie to work. According to the report, he does this to show that he takes his job very seriously (he earns about P200 a day). Ruben said that passengers are more quick to trust him because of his attire.

7. U.S. military is on its way to getting its Iron Man

This is the closest the U.S. military has gotten to having Iron Man in its front lines—but without the ability to fly. Still, the real-life armor, called Tactical Assault Light Operator Suit (TALOS), is designed with liquid armor that will solidify on command. There are existing technologies similar to it, but the researchers plan on adapting them to make the suit advanced and maneuverable. The TALOS program is set to release its first prototype in 2018, but there is no definite estimate of how much it will cost.

8. Pacquiao promises "no more absences" should he be elected senator

Should Manny Pacquiao win the elections in 2016, he promises to give his "full focus" as a senator. In an interview with ANC, the boxer said that he recognizes the bigger responsibilities of a senator, adding, "Kapag pumasok ako kailangan seryoso, walang absent, palaging papasok, dahil buong bansa ang responsibilidad mo."

In January, Pacquiao racked up the most number of absences in the House of Representatives in 2014. His grand total? A week's worth of attendance for an entire year.

Whether you were among the '90s babies that got excited when the clock struck 4:30, or if you woke up early to follow Sir Chief and Maya's love story, we're sure you probably obsessed over a Pinoy TV show or two.

10. 10 Cool Slip-Ons For the Sneakerhead in You

When shoelaces are just too much of a hassle for you, slip-ons are definitely the way to go. These 10 pairs will add an extra pop of cool to any OOTD.