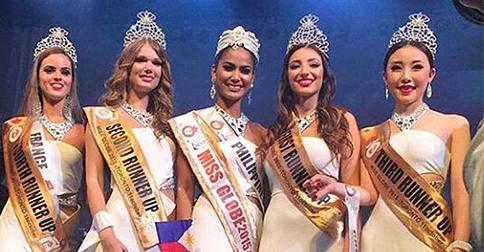 Bb. Pilipinas Tourism 2015 Ann Lorraine Colis was crowned Miss Globe 2015 at the Rose Theater Brampton in Toronto, Canada on October 9, besting 54 candidates from all over the world. The Bb. Pilipinas’ Facebook account congratulated Colis, saying, "The special recognition illustrates worldwide acclaim and appreciation for true Filipina grace and beauty and her win is a proud moment for our country."

It was like something out of their telenovela, Ina, Kapatid, Anak, when the friendship of Kim Chiu and Maja Salvador was rocked by controversy in the form of Gerald Anderson, who dated the latter after splitting up with the former. In an interview with Boy Abunda on Thursday, Maja refused to divulge details of their falling-out, but said that she and Kim were rebuilding their friendship. "Sobrang masaya ako kung ano ang estado, kung ano ang mayroon kami ni Kim...papuntang friendship po. Kasi kung nawasak 'yong dati, sobrang nadurog ito, paunti-unti binubuo," she said.

3. Selena Gomez reveals she has lupus

In a shocking interview with Billboard, pop singer and former Disney star Selena Gomez revealed that she was diagnosed with lupus, which explained her sudden hiatus in 2013. "I was diagnosed with lupus, and I've been through chemotherapy. That's what my break was really about. I could've had a stroke," she said. "I locked myself away until I was confident and comfortable again."

Lupus is a chronic disease that affects the immune system, causing it to attack healthy tissue instead of of viruses and bacteria.

John Boyega, a newcomer in the Star Wars franchise, has been criticized by fans for playing a black Stormtrooper in the highly anticipated Star Wars: The Force Awakens. In an interview with V Magazine, he addressed the "unnecessary" remarks against him, saying, "You either enjoy it or you don’t. I’m not saying get used to the future, but what is already happening. People of color and women are increasingly being shown on-screen. For things to be whitewashed just doesn’t make sense."

5. Pixar reveals movie release schedule for the next five years

Pixar has released its five-year lineup earlier than scheduled. Fans may be a bit disappointed that Toy Story 4, which was set to be released in 2017, has been delayed to 2018. On the other hand, The Good Dinosaur will be in theaters this November. We will be seeing Finding Dory in 2016, Cars 3 in 2017, and The Incredibles 2 in 2019. A new movie entitled Coco, which will be released November 2017, will tackle the Mexican holiday, Dia De Los Muertos.

6. A carpet is getting more right swipes in Tinder than you

A single, 25-year old carpet has been making waves all over the Internet, particularly dating app Tinder. Its profile description says, "I’m just a carpet called Clive looking to get laid without being walked over (I hate that). What’s wrong with getting in a pile for a bit of a shag?" The account first surfaced on Reddit, where a user showed punny and interesting text exchanges with other Tinder users.

The Liberal Party has postponed the presentation of its Senate slate for 2016, which was originally scheduled on Friday, October 9. This was reportedly due to former MMDA Chair Francis Tolentino's withdrawal from the party and Quezon City Mayor Herbert Bautista's request for "more time" to consider running for higher office. In a statement, the LP moved the event to Monday, October 12.

According to the Committee to Protect Journalists' Global Impunity Index for 2015, the Philippines now ranks fourth in the world in terms of impunity in the killing of journalists. It fell one place from its 2014 rank, but still remains the only country in the top five that is "not in a state of large-scale armed conflict." Other countries in the top five are Somalia, Iraq, and Syria.

9. 10 Art Exhibits You Should See This October

Looking to get a dose of culture this month? You're in luck because October is also Museums and Galleries Month! We round up a list of 10 art exhibits you shouldn't miss, from a photo exhibit by a Japanese artist to an interactive tribute to BenCab.

10. Rada Radar: 10 Restaurants to Try on Rada Street and the Rest of Legazpi Village

Tucked in the food haven of Legazpi Village is the bustling Rada Street, filled with cozy cafes, hush-hush speakeasies, exotic treats, and more.