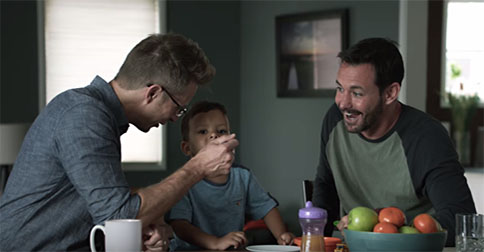 1. This geeky LGBT ad will warm your heart

An ad for a new Star Wars-themed line of Campbell's soups has gone viral for showcasing two gay fathers and their son. The commercial features the two dads competing to deliver a better Darth Vader impression. Campbell's joins the ranks of Cheerios, Tylenol, Ikea, and other big companies that have featured LGBT couples in their ads.

Maine Mendoza has only been in showbiz for three months, and she has already hit two million followers on Twitter. The #AlDub phenomenon broke records with a total of 25.6 million tweets on September 26, surpassing the Super Bowl XLIX and the Video Music Awards’ numbers. Maine now ranks as fourth in the fastest growing celebrity profiles on Twitter worldwide, with Taylor Swift being the first, Katy Perry second, and Ellen Degeneres being the third. In the Philippines, she tops the list, with Alden following her at second.

3. Is Nikki Gil quitting showbiz after her wedding?

In an interview with ABS-CBN, Nikki Gil admitted that she was unsure of her future plans after she ties the knot with her non-showbiz boyfriend. "Different season, different chapter," she said. "We’ll see. Right now, my focus is on what’s happening in my life right now, on the wedding. We’ll see what happens." She did, however, confirm that she will be taking a long vacation after her wedding.

In case you haven't heard, American Idol is on its last season. The fifteenth and final season will premiere on January 2016, with auditions already ongoing. Kanye West has joined in on the fun, giving a surprise (and fake) audition for judges Keith Urban, Jennifer Lopez, and Harry Connick, Jr. in the San Francisco auditions. His wife, Kim Kardashian, recorded the entire performance of his hit song, "Gold Digger" and shared it with her followers on Twitter and Instagram.

5. This GoPro video of a backpacker falling off a suspended bridge is terrifying

A French tourist hiking with three fellow backpackers in New Zealand captured a first-person video of the group falling off the suspended Hopuruahine bridge. The footage shows the group crossing the bridge when a cable snaps and the hikers fall into the water 25 feet below. Luckily, no one was injured but it's enough to put anyone off outdoor adventures for a while.

Artist Wendy Tsao made headlines for transforming Bratz dolls into empowering role models like Malala Yousafzai, J.K. Rowling, and Frida Kahlo. Tsao applies personal touches to commercial toys, like having them wear more natural makeup, as a way to inspire kids to talk more about real-life women heroes. "In this project, I repainted and reclothed the manufactured dolls into the likeness of real, inspiring women—as young girls," Tsao writes. "As a parent, I’d love for my child to play with a young J.K. Rowling or Malala and have conversations about them."

As the COMELEC gears up for the upcoming election debates, presidential candidate Sen. Grace Poe released a statement Monday challenging her opponents to a televised debate. "Campaigns should be caravans of intellectual discourse and meetings of the mind. Let's show the stuff we are made of, what we want to do for the country, what the people can expect from us," she said. The COMELEC plans to do several debates for both president and vice president candidates, but have yet to announce whether they will be televised.

8. Ombudsman finds probable cause to charge VP Binay with graft

The Office of the Ombudsman found probable cause to charge Vice President Jejomar Binay for graft, releasing a statement just hours after the latter filed a certificate of candidacy for the 2016 elections. Both the VP and his son, former Makati Mayor Junjun Binay, are suspended from public office and are facing charges related to the controversial Makati City Hall Building II and Makati Science High School Building. Binay’s running mate, Sen. Gringo Honasan, is also facing graft charges in connection with the pork barrel scam.

If you want to make an eye-catching statement with your #NOTD, take your pick from these 10 nail colors to up your nail game.

Who says it's too late into the year to start getting fit? When you need an extra nudge to head over to the gym, it's time to hit the couch with these 10 movies that will get you motivated in no time.