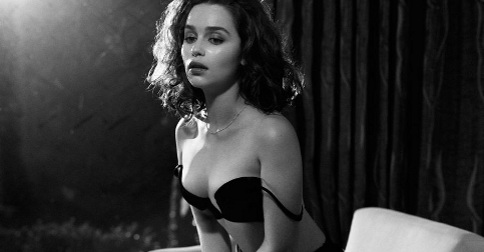 ...at least according to Esquire, anyway. The 28-year-old actress, who plays fan-favorite Daenerys Targaryen on the show, appears naked on the cover of the magazine's November issue to the delight of her male fans everywhere. She joins the ranks of other actresses who were bestowed the title, including Penelope Cruz and Scarlett Johansson.

Nadine Lustre denied rumors that said her love team with James Reid was being "molded" to compete against GMA Network's AlDub. In an interview on Tuesday, she admitted this was the first time she heard of the rumor. "Hindi naman po competition ang tingin namin. Kasi po we’re all the same. Pare-parehas po kami ng henerasyon," she explained. "At least, in the future, 'yong mga ka-generation namin, masasabing nagbigay kami ng saya."

Former Los Angeles Laker (and Kardashian family member) Lamar Odom was reportedly found unconscious at a brothel in Nevada and was hospitalized. Dennis Hof, the owner of the legal brothel, said that Odom had been taking herbal Viagra and had drunk cognac since arriving. but wasn't aware of the latter's use of other drugs. On Tuesday night, two women checked up on him after not hearing from him since early morning. As of writing, officials have no immediate word on his condition.

Here's some awesome news! Heneral Luna producers are bringing back half-priced tickets for students who still want to catch the film in theaters, as a "thanksgiving gift." The film is now on its sixth week in Philippine theaters, and according to its official Facebook page, will also be hitting the big screens of the United States and Australia. The hit movie directed by Jerrold Tarog is also the country’s entry to the Best Foreign Language Film category of the 88th Academy Awards.

"Manus x Machina: Fashion in an Age of Technology" is the official theme for next year’s Met Gala, as announced by the Metropolitan Museum of Art. The prestigious gathering will be sponsored by Apple and is set to happen on May 2, 2016, featuring handcrafted pieces alongside machine-made and ready-to-wear garments. These items incorporate modern technology with fabrics that are thermo-shaping, circular knitting, and more. The biggest names in fashion like Nicolas Ghesquiere, Karl Lagerfeld, and Miuccia Prada will convene with the tech world’s major players. Apple Chief Design Officer Jonathan Ive is the acting co-chair for the event.

6. Did Sara Duterte shave her head to urge her father to run for president?

Davao City Mayor Rodrigo Duterte again denied that he is running for president on October 12. In the same press conference, he also read a letter from his daughter, former Davao City mayor “Inday” Sara Duterte, asking him not to pursue the presidential seat. However, Sara posted a photo of her shaved head on October 14 with the caption, “Nagpa-upaw nalang ko samtang naghulat #Duterte2016 #kalboparasapagbabago #NohairWecare bisan walay kwarta, bisan way makinarya, bisan mapildi #justDUit.” (I shaved my head while waiting #Duterte2016 #kalboparasapagbabago #NohairWecare. While we have no money, no machinery, and risk losing, #justDUit.) We can only guess that this may mean a change of heart.

The Philippine Atmospheric Geophysical and Astronomical Services Administration (PAGASA) announced that tropical storm “Lando” (with international name “Koppu”) has entered the Philippine Area of Responsibility (PAR) at 2 p.m. on October 14. It is currently located 1,440 kilometers east of Luzon and has maximum winds of 65 to 80 kilometers per hour. “Lando” is expected to be at 560 kilometers northeast of Baler, Aurora by Thursday morning.

In an interview with ANC's Headstart, vice presidential candidates Sen. Antonio Trillanes IV and Sen. Alan Peter Cayetano both denied rumors that they were Sen. Miriam Defensor Santiago's running mates. Trillanes said that he has already declared his support for Sen. Grace Poe (who will be running alongside Sen. Chiz Escudero). Cayetano, on the other hand, said he is still waiting for Davao City Mayor Rodrigo Duterte to run for president. "I think she announced na meron na [siyang running mate]. Sabi niya nagkausap na sila at hindi kami nagkausap," said Cayetano.

Souvenirs are mostly given in celebrations like birthdays and weddings. In the Philippines, even public officials join the fun of giving trinkets to remember them by. We’ve compiled 10 items from politicians that will make you laugh (or cringe).

Have you ever loved two songs so much that you wish you could listen to them both at the same time? Mashups are kind of like that. Here are 10 tracks that seamlessly blend different artists and genres to create one, smashing sound.