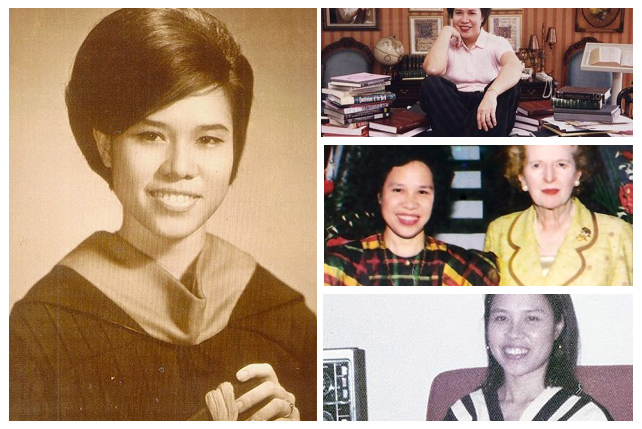 Will she be the next president? 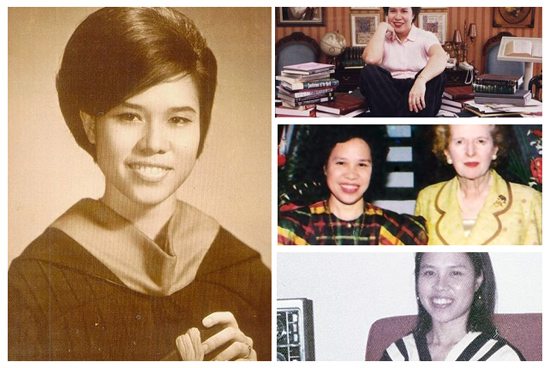 Known as the “Iron Lady of Asia” and popular among the youth for her memorable witticisms, Sen. Miriam Defensor Santiago has made Philippine politics even more colorful. The lady senator won the Ramon Magsaysay Award for Government Service and the 1985 TOYM Award for Law, just to name a few. But apart from those numerous accolades and unforgettable moments in the Senate, what else do we know about her? 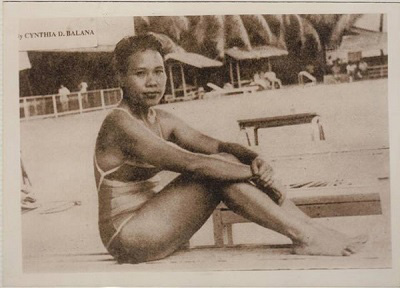 She was a swimming champion.

During her high school days at the Iloilo Provincial National High School, Miriam was considered a “child prodigy.”

She excelled in almost all areas, including swimming. In fact, she emerged as champion during a provincial swimming competition sponsored by the Red Cross. As a freshman, she was also a Spelling Bee champion and appointed as editor-in-chief of their high school paper, a position she held until graduation. 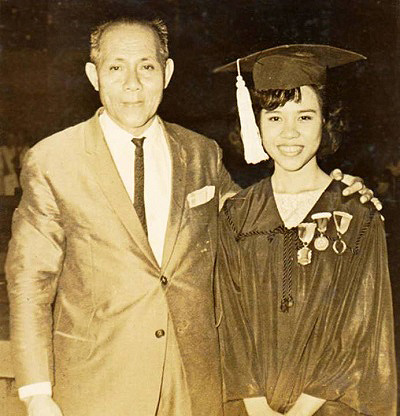 She finished B.A. Political Science in UP Visayas in only three and a half years.

However, she decided to remain in the university for an additional semester and finished her course with an almost perfect grade of 1.1 (1.0 is considered the highest grade in the Philippines). 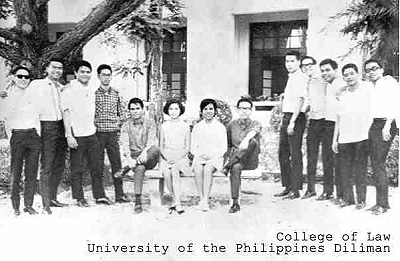 She was a “super girl” at UP Diliman.

After earning her B.A. Political Science degree from UP Visayas, Miriam flew to Manila to take up Law at UP Diliman. During her stay in the institution, she once again made her presence known through her academic prowess.

She set a lot of records in the university including being the first female editor-in-chief of the student newspaper, the Philippine Collegian. This is a notable achievement because for 50 years, only male students held that position.

She also made history by earning the highest number of consecutive college scholarships in UP and becoming the first female student to win “Best Debater” in the annual debate between UP Manila and UP Diliman law schools.

Miriam was also a two-time recipient of the Vinzons Achievement Award for excellence in student leadership. Due to her remarkable achievements, Miriam was chosen to become one of the UP Ten Outstanding Coeds and was described by Manila Chronicle magazine as “super girl at the state university.”

She almost died in a car crash.

On April 28, 1991, while Miriam was on the highway of Tarlac for a speaking tour, a vehicle smashed into the car she was riding. She sustained life-threatening injuries and had to be airlifted by helicopter from Tarlac to the Metropolitan Hospital in Manila.

Although the case remains unsolved up to this day, it is said that the accident was an assassination attempt. Miriam was the Agrarian Reform secretary and running for presidency when the incident occurred. 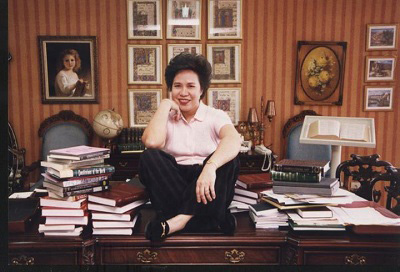 She is a “knowledge vulture.”

Even at a young age, Sen. Miriam already had a passion for knowledge. “Oh, I studied all the time,” she said in an interview with the Philippine Star. “Let’s just say I was a knowledge vulture. I loved learning things. I loved learning encyclopedias. I had a promise to read the encyclopedia from beginning to end, and I finished it.”

She also owns her own library where she keeps her collection of almost one million books, most of which she already read. Her favorites include historical novels by Leo Tolstoy and other Russian authors.

She wanted to be a nun.

Ever since she was young, Miriam always wanted to be a nun because that was the fad at that time and she was also taught by nuns. However, she soon realized that it’s impossible as her parents were having trouble making ends meet and as the eldest of seven children, she had to support her younger siblings. 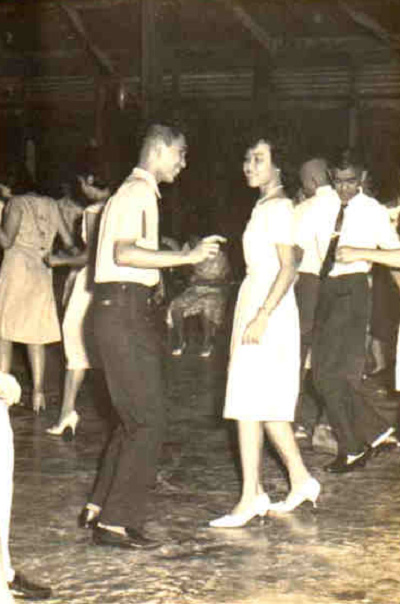 She never had crushes on boys.

Growing up in a big family, Miriam learned to treat her boy classmates like they were her brothers. As a result, she never had crushes on boys. In fact, in the same interview with the Philippine Star, the lady senator said that she never had a crush on anybody or anything until she met her husband.

“I really thought they were inanimate creatures,” she quipped. “For me, young men were just pieces of furniture, you know. They were sitting there in class with me, and I was never conscious that they were males. Or that there were attractions to them (laughs). I can see that you are totally amazed, but I am amazed by myself, too. So, in effect, I was extremely naive.” 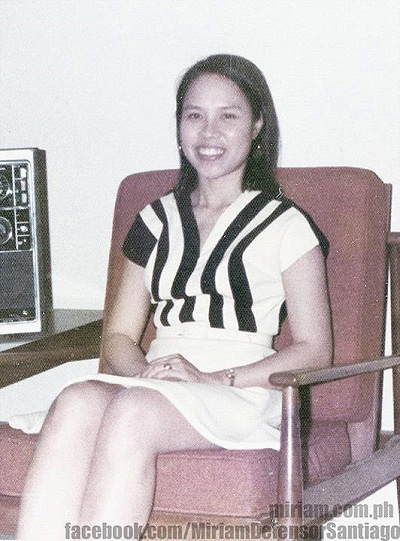 She never used makeup because she had “flawless skin.”

According to the senator, she never used makeup since she was a little girl because she had “flawless skin” and “cherry pink lips.” She didn’t use any cosmetic product in high school and only washed her face a lot as part of her morning regimen.

She always wanted to be a writer, but ended up being a lawyer because “they have a lot of relatives who are criminals.”

She wanted to take up literature in college, but later changed her mind when her father told her that she would only end up working as a professor.

“He asked if that was what I wanted,” she said in an interview with the Philippine Star. “And we have a lot of relatives who are criminals, so you should be a lawyer. Many of my relatives were honor graduates but many of them were also cattle rustlers, or they were always murdering people or burning other people’s houses (laughs). My father represented them all and acquitted most of them. That was the future laid out for me.” 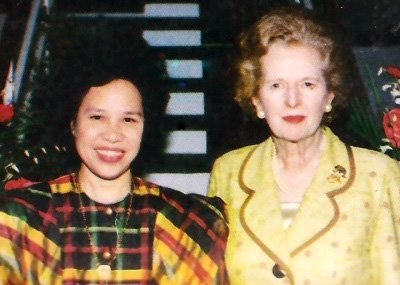 She considers herself as Margaret Thatcher’s protege.

She met Thatcher in the Philippines while the latter was touring Asia. At that time, Miriam just lost in the presidential elections and Thatcher gave her “extraordinary sympathy and compassion.” In fact, the late prime minister read her book, Cutting Edge, and praised her for it.

Read the full article, "15 Surprising Things You Didn’t Know About Miriam Defensor Santiago" on Filipiknow.net. Minor edits were made by the SPOT.ph editors.

Filipiknow Miriam Defensor Santiago
Your Guide to Thriving in This Strange New World
Staying
In? What to watch, what to eat, and where to shop from home
OR
Heading
Out? What you need to know to stay safe when heading out