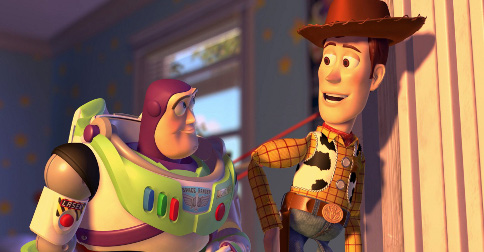 1. This heartwarming Pixar video on BFFs will bring tears to your eyes

If you needed a reason to hug your BFF today, this is it. Pixar is celebrating their 20th anniversary with a heartwarming supercut of their animated characters who also happen to be BFFs. Think Woody and Buzz from Toy Story or Sulley and Mike from Monsters Inc. The feel-good video also features a clip from the upcoming Pixar movie, The Good Dinosaur, which hits theaters late November.

2. Daniel Padilla will endorse presidential and senatorial candidates for the 2016 elections

Karla Estrada confirmed to PEP.ph that her son, Daniel Padilla, will be endorsing candidates in the upcoming 2016 elections. She said that he will be endorsing a presidential and senatorial candidate, but they haven't made a final decision just yet.

3. Lady Gaga opens up about her battle with depression

On Instagram, Lady Gaga posted a photo of her Billboard magazine cover with Elton John where she opened up about her battle with depression. "I've suffered through depression and anxiety my entire life, I still suffer with it every single day," she said. "I just want these kids to know that [the] depth that they feel as human beings is normal. We were born that way."Although she is known for communicating to her fans via social media, she said that the platform can hurt people dealing with depression.

4. Katy Perry is launching her own video game app

Katy Perry announced that she has an app in the works, entitled Katy Perry Pop. "We’ve been working on this game for over a year now," she wrote on her Instagram post. "I’ve created the most fun, colorful world that helps guide your musical dreams. App coming soon!" Her post showed the app version of Katy (featuring Left Shark) in a rainbow-colored virtual world. Other video games by stars are Kim Kardashian: Hollywood by Kim Kardashian, and Path to Fame by Demi Lovato.

6. A teenager in a cape files COC for president

Just when you thought you’ve seen every gimmick possible in the week-long filing of Certificate of Candidacy (COC)—from Nazis to those capable of talking to aliens—here comes 19-year old Earl Christian Ansay. On October 16, the last day of filing, Ansay came to the COMELEC office in a cape, with gloves and boots to match. Even if reporters pointed out that the minimum age required to run for presidency is 40, he said he just couldn’t wait to help the nation. His proposed platform would be to raise journalists' pay, acknowledging the risks they take to bring information to the public. When asked about his running mate, he said, "'Pag may independent, sali natin!"

In an interview Friday, Sen. Miriam Defensor Santiago said that the Marcoses don't owe Filipinos an apology for Martial Law. "In the first place, it was not the case that President Marcos the father pooled all the Marcoses in one table and they all decided jointly to do certain activities," she said. "[Martial Law was] a result of policy decisions of the executive department of the government—President Marcos and his advisers."

Still, Santiago said she did not backtrack her decision as Regional Trial Court judge to release arrested students during Martial Law. "I do not have to reconcile me as a trial judge [with my decision to run with Marcos]. Time has changed. Your opinions and ideologies are different from those of your parents'. You always have to adjust to the times."

Former chief of the Philippine National Police Special Action Force (PNP SAF) Getulio Napeñas has filed his COC for senator at the COMELEC office on October 16. Napeñas led the Mamasapano operation where 44 elite soldiers were killed. He said that this was a personal decision and that he is running under the ticket of Vice President Jejomar Binay’s United Nationalist Alliance (UNA) because Binay is the first government official who showed respect for the slain members of the SAF.

9. 10 Things Only Those Who Wore Braces Would Understand

Many of us have been through the painful stage of having our pearly whites aligned by metals (okay, ceramics for some). From brackets to rubber bands, here are 10 things only those who wore dental braces would know.

10. 10 New Restaurants You Need to Try This Month

Stumped on where to eat? Feeling overwhelmed with all the choices? We give you a list of new restaurants that you should put on your must-try list.