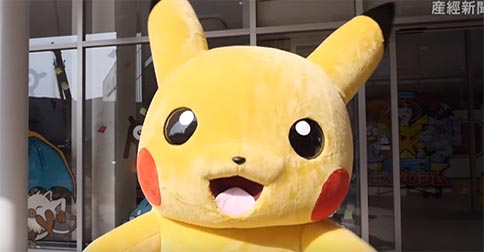 No November 2 holiday, study says cheese is as addictive as drugs, and more.

If you love Pokemon, you should probably make Osaka your next vacation destination. The Pokemon EXPO Gym is the first "hands-on entertainment facility" that aims to help fans improve their gaming skills via training programs. An app is set to launch in November that will help gamers keep track of their stats and rankings in the gym.

According to reports, a sequel to the super dapper Kingsman: The Secret Service will be released on June 2017. Director Matthew Vaughn has not yet been confirmed to return, but he has previously expressed interest in doing a sequel. The espionage's star, Taron Egerton, is also expected to reprise his role.

3. Attention Game of Thrones fans: Tywin Lannister is auctioning off his Mustang

Tywin Lannister—scratch that—Charles Dance is auctioning his 1967 Mustang convertible through Classic Car Auctions of the United Kingdom. Dance and his wife owned this Mustang for 11 years before it was fully restored in 2013. Here’s the good part: It was driven daily prior to its sale. Imagine Dance driving this Mustang in his Lannister suit. How cool does that sound?!

4. New trend: Hair tattoos will be your next accessory

Move over, flash tattoos (you know, those gold and silver temporary tattoos everyone's been crazy about). Kylie Jenner has recently been spotted with hair tattoos. If you’re wondering how tedious the process is—it’s not. These Scünci tats work just like temporary skin tattoos. Just place it on your hair, dampen with water and ta-da, instant bling! Although of course, your hair should be sleek and straight for this to work (sorry, curly-haired ladies). Bonus: You can still use them on your skin. As of writing, the product is still not available in the Philippines...yet.

5. Study says cheese is as addictive as drugs

Now we know why we just can't get enough of cheese. A new study from the University of Michigan examined why some food is more addictive than others. According to researchers, cheese is especially addictive because of casein, a protein found in all milk products that when digested, releases opiates called casomorphins. "[Casomorphins] trigger that addictive element," explained dietitian Cameron Wells.

6. Palace says November 2 is not a holiday

The Palace announced on Thursday that work and classes will not be suspended on November 2 (All Souls' Day), which falls on a Monday. Commuications Sec. Herminio Coloma Jr. said that among the list of declared holidays, only November 1 is a special non-working day.

Vice presidential aspirant Sen. Chiz Escudero cannot replace his running mate, Sen. Grace Poe, should the latter lose against the cases filed for her disqualification. Poe’s camp asked for more time to provide the Senator’s DNA results before the Senate Electoral Tribunal (SET). Even without the DNA results, her camp claims to be confident about the strength of her legal documents. Escudero, on the other hand, said that replacing Poe is not an option. Since both he and Poe filed their COCs as independent candidates, replacement is not allowed under the law; only a fellow party member could be a substitute for a candidate bowing out of the race.

9. 8 Types of Shoes Every Working Woman Must Own

When it comes to dressing for the office, you need shoes that are comfy, stylish, and professional. FemaleNetwork.com shows you the eight types of shoes every working woman should own, from a reliable pair of flats to must-have black pumps.

10. 25 More Celebrities and Their Alma Maters

Although we often associate celebrities with fame and good looks, some stars have gone beyond just the glitz and glamour to pursue an education. Here are 25 local celebrities and their respective majors in college.