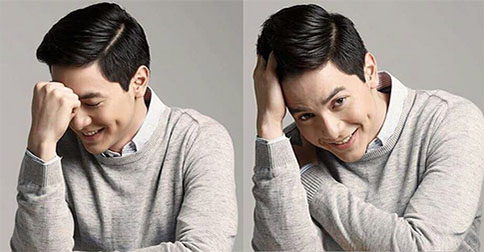 According to concert producer Joed Serrano, he has offered Alden Richards a whopping eight-digit deal for a two-night Valentine's Day concert at the Araneta Coliseum. "Ang problema namin ngayon, sa dami ng commercials, sa dami ng gagawin [ni Alden]—may teleserye, may gagawing pelikula—saan isisingit?" he said. "But they’re very grateful for the offer, kasi this is going to be the very first time sa GMA 7 na may mag-a-Araneta." He also admitted that the fee is four times higher than that of Vice Ganda's. Meanwhile, Alden's camp has yet to release a statement.

In an interview with PEP.ph, Jennlyn Mercado denied rumors that she was making a network switch after she was reportedly disappointed at the lack of support from GMA 7 for her latest movie, The Prenup. In fact, she confirmed that she will be doing a new telenovela after her current one, My Faithful Husband, wraps up. She admitted, however, that GMA Network didn't promote the film, saying, "Mayroong mga dapat naka-schedule pero na-cancel ako. Hindi ko alam. Ewan ko kung may ibang rason. Hindi ko alam kung ano ang nangyari."

The owner of the Rhode Island farmhouse that inspired the haunted house from The Conjuring is planning to sue Warner Bros. According to the owner, Norma Sutcliffe, she and her family have been haunted—not by ghosts—but by fans trespassing on their property. "We had harassing phone calls in the middle of the night," Sutcliffe said. "They've had discussions of people destroying the house because 'it's so full of evil.'" She insisted that her house does not have any supernatural entities.

An awesome collaboration happened when Paramore’s Hayley Williams joined Chvrches and their vocalist, Lauren Mayberry in singing an eargasmic live performance of "Bury It" in Nashville on October 27. If you don’t already know, Hayley is a big fan of Chvrches, and this is her way of thanking them for their cover of Paramore’s “Ignorance” on Rock Band 4. Hayley tweeted a photo with Chvrches with the caption, "Don't know what was more fun—finally meeting these buds or singing a song [with] them. Love [Chvrches] so much."

Japan-based consumer electronics company Nintendo said on October 29 that it is pushing back the much-awaited launch of its videogame for smartphones to March 2016, which led to more than 10% drop in shares. According to its previous CEO, Satoru Iwata, they will launch the first smartphone game by the end of 2015. Chief Executive Tatsumi Kimishima said this move will help Nintendo focus on selling their existing consoles, then introduce their new applications after. He did not, however, confirm if Mario would enter the smartphone world.

6. You have to see the characters of Pixar’s Inside Out react to the trailer of Star Wars: The Force Awakens

We mean it—you have to watch Joy, Sadness, Anger, Disgust, and Fear watch and react to the trailer of Star Wars: The Force Awakens through Riley’s eyes (we see what you did there, Disney). Fear naturally panicked at the sight of Darth Vader’s burnt mask. They all seemed pleased until the trailer showed the release date: December 18. Anger asked, "Did they just say we have to wait?" while Sadness commented, "That’s a long, long, long, long wait." We feel you, guys.

7. Bongbong says P-Noy should apologize for the death of SAF 44

Martin Diño has withdrawn his presidential candidacy and named Davao City Mayor Rodrigo Duterte as substitute. In an interview with GMA News, Diño said he withdrew because he learned that he may be declared a nuisance candidate by the COMELEC. He maintained, however, that the PDP-Laban is a legitimate political party that includes former President Cory Aquino and Vice President Jejomar Binay as former members. Although the party passed a resolution compelling Duterte as subsitute, the latter has yet to make an official statement on the matter.

9. 10 Things Pinoys Do During Undas

It’s almost November 1! More than all the scary stuff we see on TV, it’s that time of the year to reunite with our departed loved ones. When it comes to commemorating the dead, we Filipinos do things our way. Here are 10 practices we're sure you'll observe this weekend.

Have you ever read a bar menu and found yourself clueless as to what the heck is an ale or lager? Fear no more! We give you a quick video to guide you through your next night out.