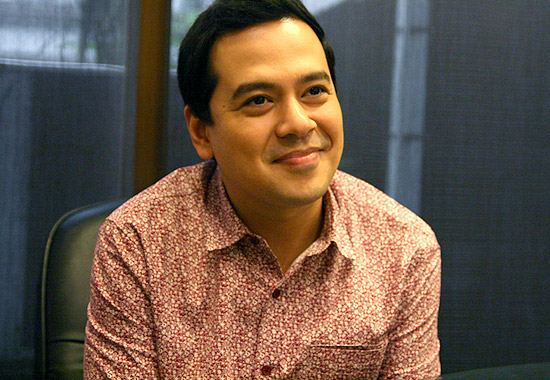 Taylor Swift sues radio host, Game of Thrones Season 6 may be pushed back, and more.

1. John Lloyd Cruz admits he once wanted to leave showbiz

He also said he wasn't afraid of the possibility that his star would fade, saying, "Hindi naman 'yon ang pinunta ko dito. It’s my love for the craft, and that’s it."

Oscar-winning director Quentin Tarantino has made headlines for participating in a rally against police brutality. The protest was organized by a group that opposed a "genocidal assault on black and Latino people in [America]." Police unions, including one in Philadelphia and another in New York, have called for a boycott of Taratino's movies, saying he projects "violence and respect for criminals" and that he "hates cops."

3. Game of Thrones' Season 6 may arrive later than expected

Bad news, Thrones fans. The sixth season premiere of the HBO show may be delayed due to premiere dates of other shows, including Martin Scorsese's Vinyl in February and the return of Girls. Thrones usually returns to TV around late March or early April, but thanks to the aforementioned premiere dates, it may be pushed back to late April at the earliest. So far, HBO has yet to announce an official release date.

Taylor Swift has accused radio host Robert “Jackson” Mueller of allegedly groping her backstage after a 2013 concert. Mueller has denied the accusations and instead placed the blame on his boss, suing Swift last September for her staff’s "verbal abuse." Taylor filed a countersuit claiming that she is sure the culprit is Mueller, who allegedly reached under her skirt and touched her inappropriately. Mueller's lawyers have yet to respond to the counterclaim as of writing.

Baracksdubs released another Obama video in celebration of Halloween, using clips of the President’s speeches and autotune. You’ve probably seen the “What Makes You Beautiful” and “Pokemon Theme Song” versions, but this one features a...growl. Happy Halloween, Spotters!

6. People are warned of a new horror house in Cainta called Bahay Trese

A haunted house with a number 13 address in Cainta is believed to be the “playground of unappeased spirits” from the Japanese massacres in the Philippines in 1945. The venue has become the inspiration of the Philippine Educational Theater Association (PETA) and World of Fun for its new horror attraction in Manila. The horror house tells a story with real stage actors providing the scares for those who dare to visit. Bahay Trese is at 4/F, Sta. Lucia East Mall, Cainta. Its doors are open from 3 p.m. to 9 p.m. until January 17.

After decades of a strict one-child policy, China will alleviate family planning to allow "each couple to have two children as an active response to an ageing population," said the ruling Communist Party on October 29. The former policy was introduced in the 1970s to stall the rapid growth of Chinese population. It has now shrunk the nation’s labor pool, and it is predicted that by around the middle of this century, one out of three Chinese will be over the age of 60. However, the government has yet to set the timelines for the new policy.

A new app-based shuttle service for commuters has cried foul over the company's pending application to be considered a transport network company (TNC). U-Hop said that the LTFRB didn't reject their application, but addressed a memo to the Department of Transportation and Communications (DOTC) for further study. The application was signed into accreditation on September 24, but has not progressed since.

9. 10 Pinoy Movie Scenes That Will Give You the Feels

If there's one thing Pinoy movies have in spades, it's melodrama. We round up 10 of the saddest scenes from Pinoy movies that will have you ugly crying in no time.

Say hello to November as it has a lot of exciting films for your enjoyment. The long wait for the next Bond movie is finally over; a new Pixar movie hits the big screen, plus more!