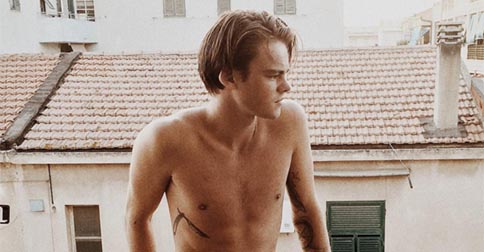 1. You've got to see this young Leonardo DiCaprio look-alike

For anyone who swooned over Leonardo DiCaprio in Titanic, you'll probably feel like you're seeing double when you check out this Swedish man's Instagram account. Twenty-one-year-old Konrad Annerud has made headlines for looking exactly like Leo circa-1990s, with the soft blonde hair and distinctive facial features. In an interview, he said that he is sometimes called by the actor's name and has even been stopped for photos, but says it's fun because "[Leo is] handsome."

Another movie reboot is coming our way. Sandra Bullock is set to star in an upcoming all-female reboot of Ocean's Eleven, which will reportedly have The Hunger Games director Gary Ross at the helm. No other details have been released, but the film is rumored to be a collaboration between Ocean's star George Clooney, former franchise director Steven Soderbergh, and the late producer Jerry Weintraub.

Jennifer Lawrence says goodbye to the franchise that made her a Hollywood star and heroine: The Hunger Games. "I think it will be pretty bizarre when the movie is finally out and…everything is officially done," Lawrence said in a press preview last October 31. "This movie has been my life for so many years." The final installation of the movie series, The Hunger Games: Mockingjay Part 2, will hit Philippine theaters on November 18.

5. This animated short from Japan presents a very accurate version of a modern Tokyo apato

You can always count on Japan to produce kick-ass animation (hello, Spirited Away). Tokyo Cosmo, a four-and-a-half-minute short film directed by Takahiro Miyauchi and Takuya Okada, shows viewers a stunningly accurate depiction of everyday Japan, featuring an imaginative woman and her mundane Tokyo apato or apartment. From the ingenius use of space common in Japanese homes, to a fictional world with a flying pig and a giant cockroach, the attention to detail is amazing. The film is an entry for the Audience Choice Award in this year's Digicon6 Asia awards, which will be announced later this month.

A Russian jet broke into pieces mid-air last Saturday morning, killing all 224 passengers and left debris across Egypt's Sinai Peninsula. So far, reports from authorities are conflicting; Russian media outlets said the pilot reported technical problems and requested landing at the nearest airport, while Egyptian aviation authorities said there were no distress calls and that the plane simply "disappeared from the radar." The Sinai Peninsula is at the center of conflict between ISIS-affiliated militants and Egyptian security forces, which led other airline companies to reroute aircrafts scheduled to fly over Sinai.

8. At least 378 flights are canceled for APEC security

Philippine Airlines and Cebu Pacific have canceled at least 378 domestic and international flights as part of security measures for the APEC Leaders Meeting to be held in Manila on November 18 and 19. PAL has canceled more than 200 flights from November 15 to 20, and affected passengers have the option to rebook their flights with no added charges. Cebu Pacific also canceled 167 flights from November 16 to 20. Many runways at the Ninoy Aquino International Airport (NAIA) will be closed for the arrival and departure of the APEC delegates on the third week of November.

Did you have a blast dressing up for this year’s Halloween, Spotters? Your favorite celebrities didn’t miss out on the fun! See who came as Edward Cullen, Black Widow, Hagrid, and more.

As any Pinoy TV viewer will tell you, no telenovela is complete without a theme song that plays during the credits, as well as pivotal moments during the show. We round up 10 of the most memorable songs over the years.