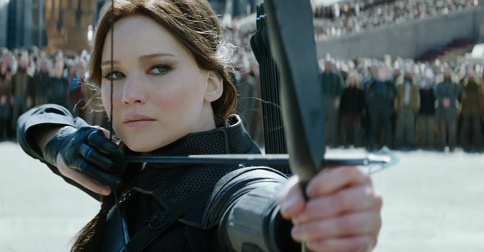 Before you get too excited, you should know that you'd need to fly to Atlanta, China, and the United Arab Emirates to give them a try. Lionsgate is planning several theme park exhibits around its films, including The Hunger Games, Divergent, and Now You See Me. The park attractions are expected to open between 2018 and 2019.

A hacker group named Anonymous Philippines hacked into Maine Mendoza's Twitter account early Tuesday and posted a series of tweets, including, "Sorry po if napadaan kami sa account ni Yaya Dub. Ibabalik din namin 'to sa tunay na may-ari." In a statement on their Facebook page, they apologized for the hack and said they had no malicious intent towards her or Eat Bulaga. Although they said they had an important message, they didn't give any specific details, saying, "Umaasa po kami na dumating 'yong ‪#‎TamangPanahon‬ upang gumising tayo sa mga hindi magandang nangyayari sa paligid."

3. Adele’s “Hello” is the first song to be downloaded a million times in a week

It looks like there’s just no stopping Adele from breaking records. Her latest single, "Hello" just became the first song to be downloaded more than one million times in a week—that’s a total of 1,112,000 downloads, beating Flo Rida’s "Right Round" (636,000 downloads). That’s a big feat since we live in a time where streaming is all the rage. The song also has the highest record of views in 24 hours, and ranked number-one on iTunes 72 hours after its release.

Lea Salonga is back on Broadway! The actress and singer is performing in New York alongside Star Trek legend George Takei in the musical Allegiance. The play tells the story of the Kimuras, a Japanese-American family forced to live in a U.S. internment camp during World War II. Allegiance is currently in previews and officially opens on November 8 at the Longacre Theatre.

5. You have to see this fluffy corgi dressed up as the cutest Stormtrooper ever

Stormtroopers are infamous for never hitting a target—but Winston, the white corgi dressed as one, is totally on point! This dog adorably combined the Dark Side with the forces of cuteness, which will either make you want your own corgi or a Stormtrooper suit. May the fluff be with you.

Here's a dose of heartwarming inspiration for today. Ninety-seven-year-old Margaret Thome Bekema was awarded an honorary high school degree from her old school, Grand Rapids Catholic Central High School. Margaret had to drop out when her mother was diagnosed with cancer, and was never able to return to school when she took on caring for her family after the latter's death. Though she never formally finished, Margaret ended up becoming a preschool teacher.

8. NDRRMC to revisit its guidelines due to P923-M idle funds found by COA

After the annual report of the Commission on Audit (COA) for 2014 revealed P923 million in unutilized disaster funds, the National Disaster Risk Reduction and Management Council (NDRRMC) said it will be revising its guidelines. According to NDRRMC, the funds in question could only be used for deaths and injuries, hence the “low utilization rate” of the donations. “The funds are intact, these were not spent randomly without consideration for the guidelines,” said NDRRMC spokesperson Romina Marasigan. The agency has created a draft for the revised guidelines that are “more comprehensive” on the utilization of donated funds.

Pinoys can’t drink without pulutan, the same way Spaniards love to drink with bar bites. Good grub can be found in tapas bars sprawled across the Metro, and here's our updated list of the best ones.

2015 is quickly coming to a close, which only means one thing: Planners! We found 50 planners suited for every personality, whether you're a fashionista or the no-frills type.