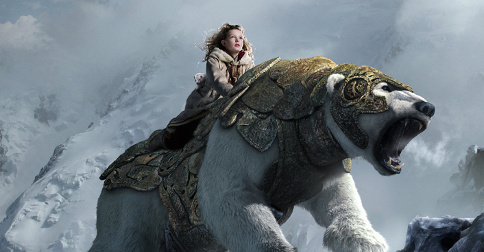 The 'All That' cast reunites, Mar on the "Laglag Bala" scheme, and more.

1. YA novel His Dark Materials is coming to TV

YA fans, we've got some awesome news for you. Philip Pullman's beloved trilogy, His Dark Materials, is getting a TV adaptation from the BBC. Pullman has given his blessing, and will even assist in searching for a writer who will stay true to the source material. The books are set in a series of parallel worlds, and will be produced by former Doctor Who producer Julie Gardner.

It was previously adapted into a movie entitled The Golden Compass (2007), which raked in box-office gold but upset fans who were unhappy with its departures from the storyline. The planned sequels never pushed through.

2. Antoinette Jadaone gives update on All You Need is Pag-Ibig

3. All That cast reunites to sing the show's theme song

Hey '90s kids, you're in for a treat! The cast of All That reunited over the weekend for Stan Lee's Comikaze Expo in Los Angeles. Their reunion fueled rumors of a Nickeloden reboot, but so far, there has been no announcement from the studio. For now, you can just enjoy their performance of the variety show's theme song.

In an emotional interview with ABC on Tuesday, November 3, Susan Williams said that it was neither depression nor alcohol and drug addiction that took the life of her late husband, comedian Robin Williams. She said that what led him to suicide was the "chemical warfare [in his brain] that no one knew about." This warfare, she said, was Lewy Body Dementia (LBD), the second most common type of progressive dementia. Symptoms of LBD include cognitive problems like confusion, reduced attention span, and memory loss, but it also affects the patient's movements and mood.

Potterheads, we know you're excited about the upcoming theatre production of The Cursed Child or the film trilogy of Fantastic Beasts and Where to Find Them—but we have more good news. "I have an idea for a children's book, actually I have written part of a children's book that I really love, so I'm definitely going to finish that. There will be another children's book," J.K. Rowling announced in an interview about her latest novel, Career of Evil. She also assured fans that she will be writing more, but did not commit to a date yet.

6. The second "germiest" tourist attraction in the world is getting cleaned after 20 years

If you’ve been to Seattle, you've probably visited the Gum Wall at Pike Place Market. If you haven’t, well, that wall bears over one million pieces of chewed gum and is the world’s second "germiest" tourist attraction. After 20 years, it’s finally getting scrubbed down on November 10 because "the chemicals, sugar, and additives in the gum are starting to wear on the building’s brick exterior." The market is hosting a photo contest as a way to bid farewell to the original gum cluster. However, people can start sticking gum on the wall again after the clean up.

Nuisance presidential aspirants flocked to the Commission on Elections (COMELEC) office on November 4 to prove that their names deserve a place in the 2016 elections ballot. Two of them became the talk of the town after they filed their certificates of candidacy last month: Allan Carreon, the "intergalactic earth ambassador," and Romeo John Ygonia, who calls himself  "Archangel Lucifer." Carreon brought his documents, which were mostly screencap printouts of his website and Facebook page. He also said that he has spoken to God via e-mail. Ygonia, on the other hand, was armed with a handwritten petition. "I am not a nuisance candidate. I am running for president not for fame, but mission," he wrote.

COMELEC Chair Andres Bautista said decisions will be out by November 30, and the final list of candidates is due on December 10.

8. Mar says "Laglag Bala" may be demolition job vs. the administration

Yes, it's true: Guys have feelings and they aren't afraid to show them. We found 10 male celebrities who don't mind getting cheesy and romantic on social media.

Unknown to many, there are plenty of beautiful boutique hotels in Manila—and by beautiful, we mean masterfully designed interiors (and exteriors) filled with cool elements. Enjoy R&R paired with a therapeutic visual experience within the walls of these 10 hotels.