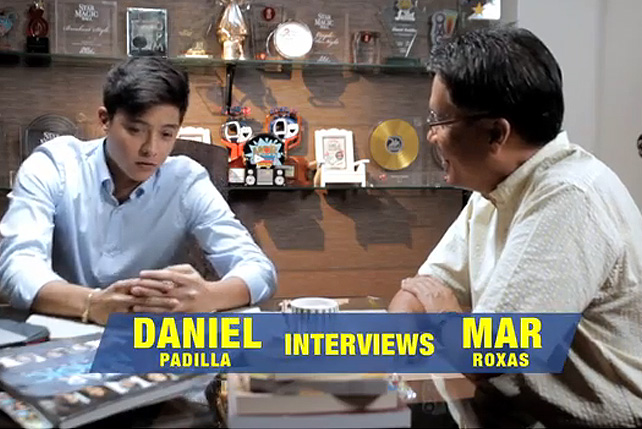 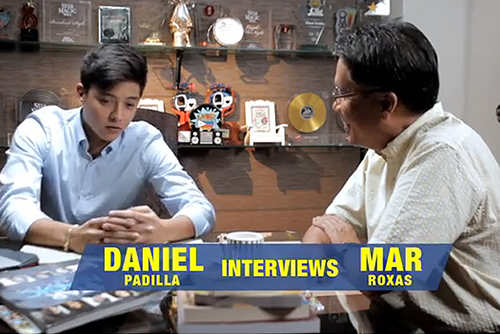 (SPOT.ph) Liberal Party (LP) standard-bearer Mar Roxas has tapped matinee idol Daniel Padilla to help him reach the masa and the youth. In a video series called Tanong ni Daniel para sa Kabataan, Daniel asks Roxas about issues such as Metro Manila traffic and Yolanda operations to get an idea of what the presidential aspirant has done and will do if he becomes president.

LP spokesperson Barry Gutierrez said on November 8, “We want him (Padilla), as a matinee idol, to draw people in and engage them in a discussion of the important issues.” Gutierrez said the campaign aims to reach an audience that would not normally listen to Roxas’ platform. “What we’re trying to do is really to broaden our access to this audience,” he said.

On November 8, Padilla wrote on Twitter, “Traffic ba kamo? May sagot diyan,” with a link to the YouTube video of his interview with Roxas. In the three-minute clip, Daniel welcomed Roxas inside his home and asked about the traffic in Metro Manila, which Daniel said, is one of the main issues the youth is concerned about.

Roxas then acknowledged the problem, and said help is already on the way. Among his proposed solutions to ease traffic are: the ongoing construction of the North Luzon and South Luzon Expressway connector, an expansion of the light rail transit system, and a revised bus system. “Malinis, maayos at mangyayari itong mga proyekto na ito,” he said.

In another video, Daniel and his mother, Karla Estrada, asked Roxas about the rehabilitation operations in Tacloban City after the damage caused by typhoon Yolanda. Both said that they are Warays, and their kababayans told them that they did not feel the government's presence during the calamity in 2013, and until now.

Roxas said that he was already in Tacloban on November 7, 2013, even before typhoon Yolanda made landfall. He outlined the efforts of the government to distribute relief goods to the survivors, and explained the “build back better” system that seeks to rebuild and strengthen the city in times of disasters. “Two years later ay tinututukan pa rin natin ‘yong pagbangon muli ng Tacloban at iba pang mga bayan at lalawigan,” Roxas said. Daniel and Karla thanked him after, saying that they really felt and saw his efforts to help Tacloban recover.

2016 Elections Ph Celebrity Endorser Daniel Padilla Eleksyon2016 Halalan2016 Karla Estrada Mar Roxas
Your Guide to Thriving in This Strange New World
Staying
In? What to watch, what to eat, and where to shop from home
OR
Heading
Out? What you need to know to stay safe when heading out