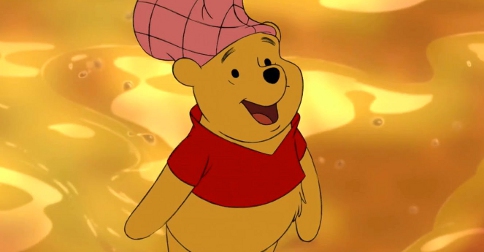 1. Winnie the Pooh is a girl

A newly released book on the history of Winnie the Pooh has dropped the bombshell that the beloved cartoon bear is a girl. The character has always been referred to as "he" by author A.A. Milne, but it turns out that he was actually based on a real-life female bear named Winnie. The real Christopher Robin (the son of Milne) visited Winnie at the London Zoo multiple times, which later inspired the books that have charmed kids and adults alike.

Maine Mendoza is the latest celebrity to show support for the plight of the Lumads, an indigenous group of people from Mindanao who were driven away from their ancestral lands. A photo of Maine holding a sign of support circulated around social media, while her brother-in-law is part of AlDub for Lumad, a people's caravan composed of AlDub fans and led by Lumad leaders. Other celebrities who have voiced their support include Angel Locsin, Aiza Seguerra, and Wally Bayola.

The diva is heading to Gotham! Mariah Carey’s voice is returning to the big screen as the voice behind the mayor of the crime-riddled city in Warner Bros.' spinoff, The Lego Batman Movie. Mariah joins a star-studded cast that includes Ralph Fiennes, Rosario Dawson, and Michael Cera. The Lego Batman Movie will be in theaters February 2017.

In a Facebook status update, London-based Filipino designer Lesley Mobo wrote in jest, "I design dresses for Bond girls in my spare time." That's right, the Salma silk dress worn by Lea Seydoux in the latest Bond movie, Spectre, is by Mobo. The designer recently staged a fashion show for the Red Cross Gala last October.

A fake street fighting app a la Fight Club hit (and fooled) the Internet on Monday. Rumblr was billed as Tinder for street fighting, which would let users hook up with people who want to brawl. Although it sounds ridiculous now, it didn't stop a number of websites from writing about it. The "creators" (a team of college dropouts creating a portfolio project) released a statement to clarify the situation, saying, "We understand that some of you were genuinely looking forward to using an app like Rumblr, and we’re sorry to disappoint. However, if you still are truly wishing to release some built-up angst, consider fighting more pressing issues such as gang violence, domestic abuse, and at-risk youth culture."

The White House has launched a new Facebook page where President Barack Obama can personally speak to followers in the first person, similar to his Twitter account which was launched last May. Obama spoke to viewers with a conversational tone in his first post about climate change, where he is seen walking around the White House’s backyard. "I want to make sure that the whole world is able to pass onto future generations the God-given beauty of this planet," he wrote.

Just one day after Sen. Grace Poe called for Transportation Sec. Joseph Abaya’s resignation, she is criticizing P-Noy for being "too tolerant and forgiving" when it comes to his friends. She also said that the transport officials lack passion, citing that talking to them is similar to talking to robots. For the Senator, the DOTC has become a liability in the current administration. "Nararamdaman ko wala silang masyadong pakiramdam kaya ‘yon nga ang problema, kulang sila sa compassion, kulang sila sa malasakit,” she said.

9. 10 Decadent Desserts That Sizzle on Skillets

In case you haven't noticed, there’s a hot new trend in serving desserts—on skillets. We found 10 mouthwatering desserts served on a skillet that will satisfy any sweet tooth.

These days, it's not enough to just put a ring on it and walk down the aisle. More and more couples are declaring their love with prenuptial photoshoots that capture their romance and personalities. Here are 10 celebrity couples who made us swoon with their unique and memorable prenup photos.