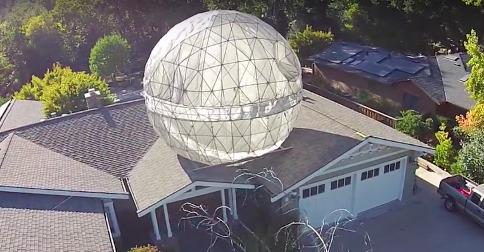 A man and his family decided to build a 23-foot tall, 400-pound Death Star above their house to impress their neighbors for Halloween, but it attracted so much attention that they decided to keep it. The structure hovers over their house in California, and even lights up at night—just in time for Christmas!

In an interview with PEP.ph, Nadine Lustre—a fan-favorite to play the next Darna—admitted that she hasn't received any offer for the role, but said that she would be willing to take on the role. "Of course, gusto ko siyempre. Darna 'yon, 'di ba? It’s a privilege na maging Darna," she said. She added, however, that she was currently focused on On the Wings of Love and her upcoming MMFF entry with James Reid, The Beauty and the Bestie. "Kung magiging Darna man ako, kailangan kong mag-train. Hindi puwedeng hindi," she said.

U.S. District Court Judge Gail Standish has dropped the copyright lawsuit filed against Taylor Swift by musician Jessie Braham, who accused the pop star of stealing his lyrics. Jessie Braham claimed that Swift used 92% of his song, "Haters Gone Hate," in "Shake It Off." Braham said he copyrighted "Haters Gone Hate" in February 2013. The California judge said Braham did not present enough factual evidence to prove his allegations, but he can still file a new complaint if his lawsuit deficiencies are corrected. Standish incorporated lyrics from Swift’s hit songs into her dismissal: she wrote, "At present, the Court is not saying that Braham can never, ever, ever get his case back in court. But, for now, we have got problems, and the Court is not sure Braham can solve them...As currently drafted, the Complaint has a blank space—one that requires Braham to do more than write his name...At least for the moment, Defendants have shaken off this lawsuit."

Rapper Missy Elliot has finally dropped her first song after seven years out of the limelight. Her new single, "WTF (Where They From)," features Pharrell and was released on Friday with a music video. Get ready to hear this on rotation in clubs and dance performances.

6. Sea disputes will be the "central issue" in Obama’s visit to Asia

The territorial dispute over the West Philippine Sea—which has put the United States in direct disagreement with China—will be the main focus of U.S. President Barack Obama’s visit to Asia, the White House said on November 12. However, the Philippines and China both agreed not to discuss the subject during the Asia Pacific Economic Cooperation (APEC) Summit. Aside from the two countries, the other claimants are Malaysia, Vietnam, Brunei, and Taiwan. National Security Advisor Susan Rice said that the U.S. hopes for a peaceful and legal agreement to resolve the issue. "But I don't expect it to be a concrete outcome of this particular visit," said Rice.

7. Michelle Obama not coming to PH for APEC

According to reports, U.S. First Lady Michelle Obama will not be visiting the Philippines for the APEC Summit, despite the confirmation of the spouses of other world leaders. Presidential sisters Kris Aquino, Ballsy Aquino-Cruz, Pinky Aquino-Abellada, and Viel Aquino-Dee will host a special luncheon on November 19 for the spouses of the leaders. According to Kris, first ladies from Singapore, Indonesia, Japan, Malaysia, Thailand, Hong Kong, and Colombia have confirmed their attendance.

The Senate Committee on Public Services held its first hearing regarding the "Laglag-Bala" scheme which is allegedly happening at the Ninoy Aquino International Airport (NAIA). The lawmakers showed disappointment over the lack of coordination between the officials involved. When asked about the CCTV footage of Lane Michael White, Manila International Airport Authority (MIAA) General Manager Jose Honorado said the Office for Transportation Security (OTS) had the tapes, while OTS Chief Roland Recomono said the footage was not within OTS jurisdiction. Honorado later admitted that MIAA had the original footage and they were responsible for operating the CCTVs. For the meantime, it has been decided that help desks with members of the Public Attorney's Office (PAO) will be put up immediately at the NAIA.

9. 10 New Restaurants to Try This November

If you’re not going out of town during the APEC Summit next week, why not try these 10 new restaurants that got our thumbs up? Dining in Manila is ever-changing; keep your restaurant index fresh!

Take a break from your busy work life and get creative! We round up crafting workshops in November that will help you de-stress and maybe even pick up a new hobby or two.