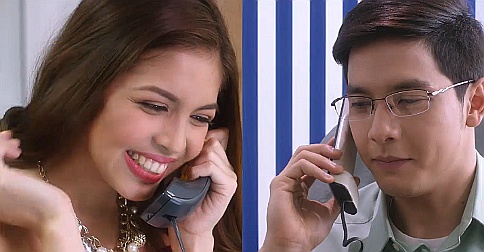 It's finally here, AlDub Nation! The first trailer of the viral love team's MMFF entry, My Bebe Love: #KiligPaMore, has been released. Directed by Jose Javier Reyes, it stars Vic Sotto as Maine Mendoza's father and Ai-Ai delas Alas as Alden Richards' aunt. If the trailer is any indication, the plot will revolve around their blossoming relationship, which both Vic and Ai-Ai's characters oppose. The comedy hits theaters December 25.

Congratulations are in order for the University of the Philippines (UP) Pep Squad. The team won a silver medal and two bronze medals at the Cheerleading World Championships held in Berlin from November 21 to 22. They won the silver medal for the All Female Team Cheer category, and the bronze medals for the cheerleading doubles and small groups mixed categories.

5. Iza Calzado has some casting suggestions for the new Encantadia

In case you missed the exciting news, GMA Network is bringing back Encantadia in 2016! Although there is no confirmation on whether it will be a reboot or continuation of the series, former cast member Iza Calzado already has some casting suggestions for her character, Amihan. "I think it should be someone like maybe Carla [Abellana] or Jennylyn [Mercado] to play Amihan," she told PEP.ph. Iza, who is now part of ABS-CBN, wished her former network luck and said that she is open to doing a movie, if given the chance.

6. These leggings with a smartphone pocket are just what your workout needs

If you've ever struggled with chunky armbands or simply holding on to your phone while you exercise, you'd probably want to get your hands on one of these! A company has created leggings with a "smart pocket" that holds your phone while you're sweating it out. It also lets you text through the "touch responsive mesh covering" and has enough space for your headphone cord. The company launched the leggings via a Kickstarter campaign with a goal of U.S. $10,000 in a little over a month.

Liberal Party (LP) standard-bearer Mar Roxas has tapped teen actress Kathryn Bernardo in his presidential campaign to reach the youth, following the lead of Daniel Padilla, who is already endorsing Roxas. Korina Sanchez-Roxas revealed the love team’s support for Roxas via her Instagram account. In the photo, the teen actors, with Roxas and Sanchez, are wearing yellow outfits and posing with the party's "Laban" sign. On a sidenote, maybe someone should tell Korina that her #PaMore hashtag is an AlDub thing.

8. Escudero to Duterte: Don’t use Poe’s case as an excuse to run

Sen. Chiz Escudero has responded to Davao City Mayor Rodrigo Duterte’s opinion on the Senate Electoral Tribunal’s (SET) decision to junk the disqualification case against Sen. Grace Poe. Duterte stated on November 21 that he is running for president because he is “so disappointed” with this ruling, which Escudero said he respects, but disagrees with. “In fact, even the Senate Electoral Tribunal disagrees with him,” Escudero said. The vice presidential aspirant said the Mayor does not need to strike Poe and “use the decision of the SET in her favor as an excuse to run.” Poe’s camp maintains that the Senator is a Filipino and that there is not enough evidence to prove otherwise.

9. 10 Delicious Food Gifts Everyone Will Love This Christmas

You can’t go wrong with one of man’s basic needs: food. It’s a fail-safe present, especially this Christmas season. Here are 10 yummy gifts that also have beautiful packaging ready for gift-giving.

10. 12 Cool Gift Cards to Give This Christmas

Gift cards are probably the best thing to give and receive this holiday season. Not only is it fail-proof for the giver, but it also gives recipients the benefit of choice! Here are 12 gift cards your loved ones won't mind receiving this Christmas.