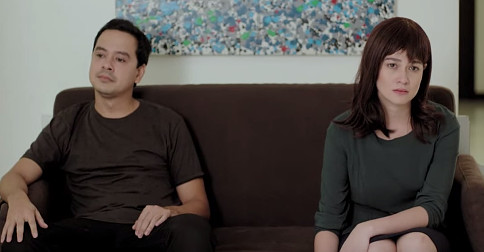 A Second Chance earns P43.3-M on opening day + more things you might have missed today

Bacon-scented underwear, Mar on his KathNiel endorsement, and more.

According to reports from ABS-CBN and PEP.ph, A Second Chance has broken box-office records with a whopping P43.3 million earned on its first day, November 25. Star Cinema's AdProm Manager Mico del Rosario said that the sequel starring John Lloyd Cruz and Bea Alonzo now holds the record for the highest first-day opening for a non-MMFF movie. He also said that more midnight screenings were added to accommodate audiences. The film is graded "B" by the Cinema Evaluation Board.

In an interview, actor Bret Jackson came to the defense of his friend, James Reid, after the latter was bashed online for reportedly being seen on a date with Julia Barretto. "Julia is friends with Sam Concepcion, one of our best friends also. We’re all barkada. So if there’s a link to that, it’s because we’re all friends," he said. He also dismissed the possibility of a romance between James and the latter's On the Wings of Love co-star, Nadine Lustre, saying, "The fans really want them to be together, so you get together then. You know how hard it’s going to be for them? To work together tapos be together pa? Let’s be realistic."

3. Charli XCX makes a documentary about being a woman in the music industry

Pop star Charli XCX has always been vocal about feminism. While touring, she made a 42-minute documentary entitled The F Word where she takes viewers behind-the scenes, with interviews and clips of her friends and artists like Nicki Minaj, Ryn Weaver, and Marina and the Diamonds. Charli XCX explains that with women now topping the charts, it’s a great time to be in the music scene. The documentary seeks to answer the question of whether the “male-dominated” industry is really changing. In a tweet, she said: "I feel like the question, 'What's it like to be a woman in the music industry?' is annoying [or] complex but still necessary. This doc explores that."

Oscar winner Jennifer Lawrence is looking into directing her first movie. “I have wanted to direct as long as I’ve wanted to act. I just don’t talk about it because I’d rather just do it,” she said. Lawrence confirmed that she signed her first directorial effort, Project Delirium, which is a story about mental warfare in the ‘60s based on a New York Times article called Operation Delirium. The 25-year-old actress said that she has wanted to direct since she was 16, and she has since taken steps to prepare for this goal. “Now I actually feel ready,” Lawrence said. She also expressed her interest in directing a comedy.

...at least initially, anyway. In an interview with The Guardian, the actor admitted that he had reservations over Sherlock's upcoming feature-length Christmas special set in the Victorian Era, saying, "I thought they’d finally lost the plot, jumped the shark...then they expanded the idea and pitched it to me properly and I think it’s fantastic." The episode, entitled "The Abominable Bride," is the first Sherlock episode to be aired after two years and will be shown on New Year's Day in the U.K. and the U.S.

Here's something we never thought we'd see: bacon-scented underwear. The undergarment is sold for U.S. $20 a pair from a bacon company called J&D Foods, and is actually available in both men's and women's sizes. The website says that the underwear will smell like bacon for up to six months, provided you follow washing instructions. If that's not up your alley, they also sell bacon-scented pillows.

On November 26, Sen. Grace Poe's camp said that the latest Pulse Asia survey revealing Davao City Mayor Rodrigo Duterte as the electorate’s top choice for president in Manila does not prove anything. The said survey was conducted from November 11 to 12 among 300 respondents. The results show Poe coming in second to Duterte. She is followed by Vice President Jejomar Binay at third, Mar Roxas at fourth, and Sen. Miram Defensor-Santiago at fifth. Poe’s spokesman Valenzuela Mayor Rex Gatchalian said that the public’s sentiments change from time to time and that they will continue campaigning for Poe’s advocacy of inclusive governance. “Furthermore, the survey only covers NCR (National Capital Region). There is more to the Philippines than Metro Manila. Hence, at this point the survey is inconclusive and not reflective of the sentiments of the country,” Gatchalian said.

8. Roxas says no money was involved in KathNiel endorsement

In an interview on ANC's Beyond Politics, presidential candidate Mar Roxas denied paying Kathryn Bernardo and Daniel Padilla for their endorsement and said that "personal experience" prompted the teen stars to stand with his campaign. "I thank them very much, Daniel in particular. He's from Tacloban. And they knew the story of what happened during Yolanda. Noong umuwi sila do'n noong bakasyon, parang nadinig nila 'yong storya and sabi nila, 'parang hindi ito totoo,' 'yong politikal na paninira," Roxas said. "Nagpapasalamat talaga ako that they said 'hindi, hindi tama ito.' So I'm grateful to them."

Everyone is suddenly a photographer as long as they have an Instagram account—which is all well and good. But if you’re looking for more interesting and eye-catching snapshots on your feed, follow these 10 photographers who actually take photos for a living and rock doing it.

It's been an interesting year for fashion. Whether it's off-shoulder tops or man buns, we round up 50 of the most stylish (or questionable) trends we've seen around Manila.