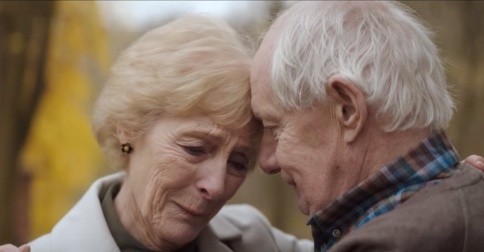 1. This ad about an elderly couple will bring tears to your eyes

A new commercial for a Swiss photo album brand called iFolor has taken the Internet by storm. The ad is told through the eyes of an elderly man suffering from dementia, who sees a photograph that transports him back to New Year's Eve—the day that he first met his wife. It's less than a minute long, but it's enough to make you reach for tissues.

If you're bored with the usual brand of scented candles, Pringles has actually released their very own line of candles that smell like their products. The range comes in three scents, namely: Pigs in Blankets, Texas BBQ, and Cheesy Cheese.

4. A true Adele-Lionel Richie duet is reportedly in the works

Drake isn't the only artist open to working with Adele; even Lionel Richie wants a collaboration. You’ve probably seen that “Hello” mashup of Adele hanging up on Richie that went viral. Now, the stars are reportedly going to work together, but we might have to wait a little longer for the finished product. “We are going to be doing something together—that’s already almost in the works...I can almost say that we are talking, but right now she has a mission. Her mission is [to] get her record out and go on tour, so until she finishes that cycle, that won’t happen just yet,” Richie said. Adele’s album 25 set record-breaking sales and downloads, and her European tour starts in March 2016.

Here's your dose of bizarre news for the day. According to the website BabyCenter.com, more and more parents are naming their kids after Instagram filters. For boys, 75% of them were named Lux and 42% were named Ludwig. For girls, 26% were named Valencia and 30% were named Juno. We're still wondering if anyone decided to name their new baby Toaster.

6. Mark Zuckerberg to give away 99% of Facebook shares to charity

Mark Zuckerberg and his wife Priscilla Chan vow to donate 99% of their shares in Facebook as they announce the birth of their first child, Max. In his published letter to Max via Facebook, Zuckerberg said he and his wife will give away their fortune amounting to U.S. $45 billion to the Chan Zuckerberg Initiative, which aims "to advance human potential and promote equality for all children in the next generation," in hopes to make the world a better place for their daughter to grow up in. "As we become parents and enter this next chapter of our lives, we want to share our deep appreciation for everyone who makes this possible,” he wrote. Once he and his wife return to work, Zuckerburg said, they will release more details about the donation.

After his recent controversial statements in a viral speech, Davao City Mayor and presidential aspirant Rodrigo “Rody” Duterte’s children apologized for their father’s behavior, but assured the public that he is smart enough to lead the Philippines. Sara Duterte, the Mayor’s daughter, took to Instagram saying that she understands where people are coming from. She said that her father “does not have the finesse of Lady Diana” but is a lawyer with “the manners of a street thug.” Davao Vice Mayor Paolo “Pulong” Duterte, on the other hand, said the attempts to ruin him and his family have begun, which he called “cheap shots.” He added, “We are certain that at the end of the day we shall be judged not by your false and reckless attributions but by the deeds done for the people while in office.”

Let’s get one thing straight here: They’re not asking for your votes, so they’re not technically campaigning. But our commendable politicians just have to be everywhere we are—like on the road—where we are actually thinking of them for totally different reasons. Here are 10 “epal” moves that add clutter to the already-hectic Philippine thoroughfares.