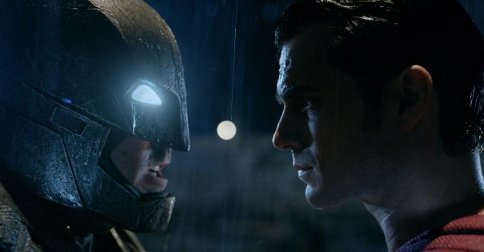 1. The new Batman vs. Superman trailer will get you pumped

Ben Affleck stopped by Jimmy Kimmel Live on Thursday to unveil the full trailer for the highly anticipated Batman vs. Superman: Dawn of Justice. The latest preview gives fans an exciting look at all the superhero action, plus a glimpse at Gal Gadot's Wonder Woman and more of Jesse Eisenberg's Lex Luthor. The film hits theaters March 23, 2016.

3. This hotline will give avid readers the perfect book recommendation

Here's something book lovers will definitely appreciate this holiday season. Penguin Random House has set up the Penguin Hotline, an easy way for shoppers to find the perfect books for their loved ones this Christmas. Describe your recipient's taste in books, and hundreds of employees will answer requests via phone or Internet to send them the perfect page-turner! It doesn't discriminate, either; Penguin Hotline recommends reads from different publishing houses to ensure diversity.

Models and It girls Gigi Hadid, Joan Smalls, and Lily Aldridge wear nothing but a pair of strappy heels in this black-and-white shot by Mario Testino for the latest Stuart Weitzman ad campaign. No, they’re not just flaunting their beautiful bodies. The ad seeks to promote confidence, empowerment, and togetherness. The campaign will be officially released in Spring 2016, along with other photos where the models are clothed.

5. A new Disney-specific dating website could help you find your own Mickey or Minnie

Mouse Mingle is a new dating app that calls itself “the place to connect people who love Disney and who want that same magic in their relationship.” Its founder, David Tavres, is a former engineer on the Disneyland railroad. Tavres said the idea came to him back in 2011 when he was asked by his friends about his relationship status while they were in Disneyland and he said he was still single because he finds it hard to find women who like Disney as much as he does. “There was no way to narrow down the searches to find women in the right distance and age range who loved Disney. That was the Inception moment,” he said, and the rest was history. Aside from the usual dating and compatibility questions, the website asks in-depth and geeky questions only a Disney fan would know. Viewing photos is free, but there’s a monthly membership of U.S. $12.55. It might actually be a small, small world for Disney fans in search of their true prince and princesses now.

6. Pido Jarencio on his former players at UST: “I thought it was their time”

Former Growling Tigers coach, Pido Jarencio, expressed his disappointment over University of Santo Tomas’ (UST) loss to Far Eastern University (FEU) in the UAAP men’s basketball finals held on December 2. UST lost by three points to FEU, with a final score of 67-62. “My heart is bleeding,” said Pido. He was the coach when UST won their last championship title in 2006, and was also there when they lost in the finals games of 2012 and 2013. “Disappointing. Those are the same players na naglaro noong finals three years ago, kaya medyo masakit kasi akala ko this is the time na eh,” the current head coach of the GlobalPort Batang Pier said. He also said it must not have been meant for UST, but life must go on.

The U.S. has been rocked with yet another mass shooting that has left at least 14 people dead and many more wounded in San Bernardino, California. President Barack Obama once again renewed his call for gun control, saying, "The one thing we do know is that we have a pattern now of mass shootings in this country that has no parallel anywhere else in world." For perspective, this is the 15th time this year that the President addressed the press after a mass shooting, as well as the 352nd mass shooting in the U.S.

The Senate Electoral Tribunal (SET) has affirmed on December 3 its decision upholding Sen. Grace Poe's eligibility to be senator on the basis that she is a natural-born citizen, junking the reconsideration plea filed by petitioner Rizalito David. Sen. Tito Sotto said that the motion was denied with the same five-to-four vote. David had questioned Poe’s qualification as a senatorial candidate in the 2013 elections—on top of the other cases questioning her fulfillment of requirements to run for president in 2016.

Every Pinoy has this picture in his head of a hearty breakfast: sinangag, egg, and tapa. There are a lot of variations of the tapsilog—here are 10 of Manila’s finest, from the go-to places to the fancier choices.

10. 10 Most Romantic Lines from YA Novels

They say actions speak louder than words, but you can't deny the impact of hearing something romantic from the one you love. Not all of us are blessed with talent to put our feelings into words, but these YA authors can do the job for us.