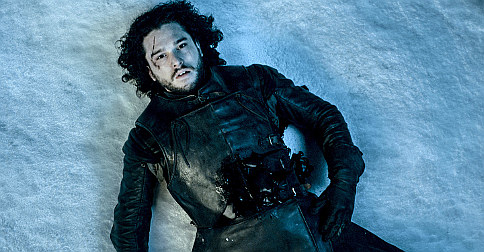 1. Check out the first Game of Thrones Season 6 teaser trailer

Fans rejoiced when HBO released the teaser poster for Game of Thrones Season 6, signaling the possibility that Jon Snow (played by Kit Harington) is alive. As if to warn fans who've already jumped to conclusions, the end of the latest 40-second teaser said, “They have no idea what’s going to happen” and that's true in the sense that it’s the show’s first time to move past George R.R. Martin's books. The new season hits screens April 2016.

Coldplay is following in the steps of Madonna, Bruno Mars, Beyonce, and Katy Perry. The British band is set to headline February 2016's Super Bowl halftime show, alongside several still-unnamed acts. "We are so excited and honored and thrilled to be playing the halftime show," said frontman Chris Martin. "It's going to be wonderful and hope we see you there." The band is set to release a new album, A Head Full of Dreams, this week.

On her Instagram account, Angel Locsin told fans that she is currently in Singapore to seek treatment for her spine injury. "Kindly squeeze me in your prayers for my back procedure tomorrow! Hope everything goes well," she wrote. Earlier in October, the actress announced that she was forced to drop out of her upcoming Darna project due to a disc bulge that developed after undergoing rigorous training for the role.

Suddenly, Holly Holm was on everyone's radar after knocking out former UFC bantamweight champ Ronda Rousey in a match last October. This resulted in numerous demands for a rematch and on December 3, fans finally got their answer. UFC president Dana White confirmed that there will be a rematch between Rousey and Holm. “Yeah, I think that if we didn’t make the rematch, me [sic] and Lorenzo should probably lose our promoters’ license if we didn’t make that rematch,” said White. “I don’t know when, but that’s the fight that will happen.”

Goodbye Marsala, hello...Rose Quartz and Serenity! Pantone, the global authority on color, has chosen the warm pink hue and the cool, pale blue shade to represent "gender equality and fluidity in modern society." According to Pantone's website, the colors can be paired with mid-tones such as greens, purples and brown, as well as pale yellows and silver. Expect variations of these two shades in your favorite stores soon!

6. You can be seranaded with Christmas carols when you go to NAIA

Late last month, Ninoy Aquino International Airport (NAIA) management put up “last look” booths with the intent of decreasing the number of “Laglag Bala” incidents as well as the anxiety they caused. This December, travelers will be greeted by choirs singing Christmas carols, too. There will be over 40 performances from choirs such as the Rizal Technological University (RTU), Philippine College of Criminology (PCCr), Trinity University of Asia (TUA), Centro Escolar University (CEU), Philippine State College of Aeronautics (PhilSCA), University of Perpetual Help Las Piñas and in Cavite, Development Academy of the Philippines, and Adamson University.

7. Binay says he's the next target of disqualification cases

All eyes will be on Binay soon, according to...well, him. On December 3, presidential candidate VP Jejomar Binay said that he’s expecting to be the next target of the cases for the disqualification from the 2016 presidential elections. He said that he and Sen. Grace Poe have been repeatedly warned of being disqualified from the race. "Kaming dalawa ni Senator Poe ay laging itinuturo na ipapa-disqualify ngayon. 'Yon lang, ang sentro ngayon ay na kay Senator Poe, at pagkatapos ni Senator Poe, malamang babalikan na naman si Vice President Binay." Yes, he just referred to himself in the third person.

We bet your schedule is already packed with parties and get-togethers this month. If you’re clueless about what to contribute and want new options other than the usual spaghetti or lechon, here are 10 munchies you can bring to impress your friends, titas, and even your boss.

End the year on a productive note with our roundup of crafting workshops around the Metro for the month of December. Whether you're into calligraphy or you want to up your gift-wrapping game, these workshops are your best bet to get creative.