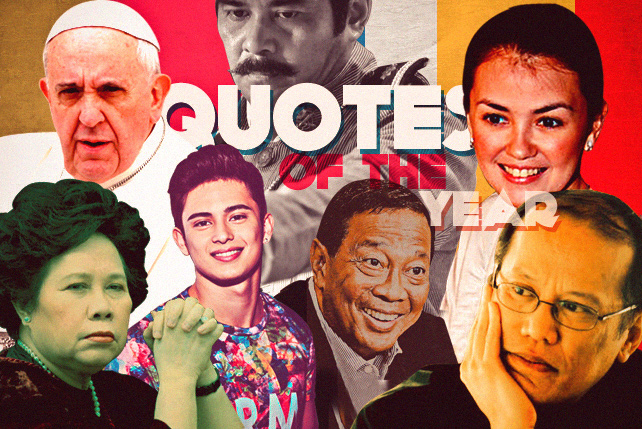 Quotes of the Year: 25 Most Unforgettable Statements From 2015

Who said, "I congratulate myself for choosing my parents well"? 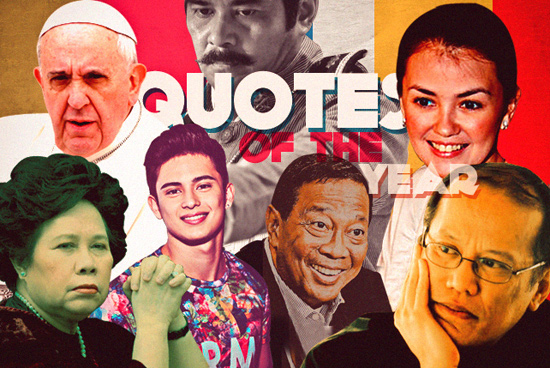 (SPOT.ph) What are the first things that come to mind when you look back on 2015? There’s the legendary yet underwhelming Pacquiao-Mayweather fight. Or maybe you’ll remember the country's accidental love team, Alden Richards and Maine Mendoza. And then there are the events we wish didn’t happen, but really shouldn’t forget: like the Mamasapano Clash and the Paris terror attacks. It certainly felt like our politicians have spent lots of time preparing for the 2016 elections, which meant sneaky campaigns all-year round and sneakier candidates trying to outdo one another.

Here's a look back on the year that was, in 25 of the most memorable soundbites. 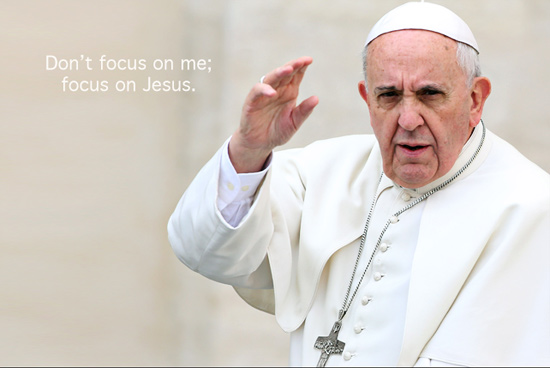 "Don’t focus on me; focus on Jesus." — Pope Francis, on the insane amount of attention he received in Manila.

Our favorite image of the Pope still has to be when he was wearing that yellow raincoat!

We don't know what's worse: this or "The dog ate my homework."

While it's always good to fight for what you think is right, here's a news flash, high school grads: No one really remembers who got top scores 10 years later.

"Kung gusto ng Diyos na buhayin ako, bubuhayin ako." — Mary Jane Veloso, hours before she was set to be executed (and subsequently given a temporary reprieve).

Veloso was originally sentenced to death after she unknowingly smuggled heroine to Indonesia. When new suspects surfaced (allegedly the ones who framed the domestic worker), she was spared, albeit temporarily.

Enrique Gil will have to wait, then. But her priorities seem to be in the right order. 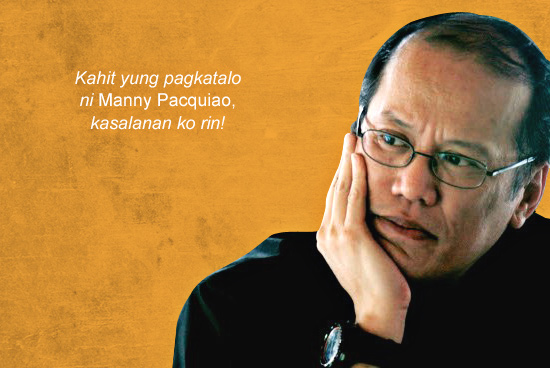 Our president's attempt at a joke.

"I told them that I would lessen my use of cuss words. I am even regulating myself and will donate P1,000 to Caritas Davao every time I would swear." — Davao City Mayor Rodrigo Duterte after meeting with Catholic bishops.

The mayor got into trouble for cursing at the Pope in his speech accepting the role of PDP-Laban standard bearer.

It must sting when people want it on record that they never had a relationship with you.

You're in jail for a reason, Senator. Try to think about that for a bit. 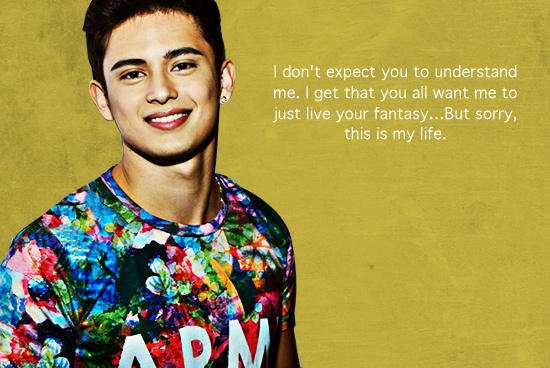 "I don't expect you to understand me. I get that you all want me to just live your fantasy...But sorry, this is my life."— Actor James Reid on his private life.

The love team of James Reid and Nadine Lustre became such a hit thanks to On the Wings of Love. Some fans, however, can't differentiate real from reel.

"In the spirit of beauty pageants, let’s end this issue with world peace." — Actress Toni Gonzaga, on the controversial way she hosted Bb. Pilipinas.

We love that she poked fun at this issue in You're My Boss, by the way.

"A fresh graduate taking on an entry-level position at a call center center or BPO would already be taxed the third-highest rate at 25%. It’s like asking an average person to weightlift a sumo wrestler." — Sen. Sonny Angara, on our income taxes.

Senator Angara made it his mission to reform the current tax system in the country. In November, he filed a bill that seeks to adjust the level of taxable income in the country. 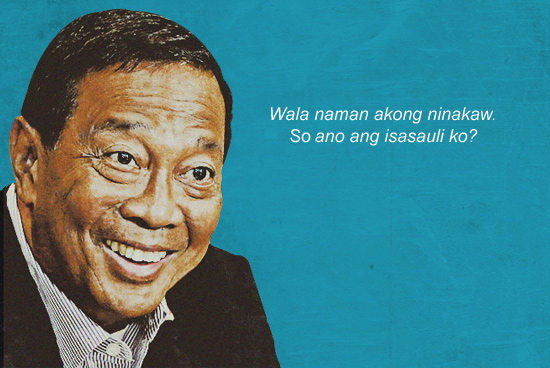 Plot twist: He was the one who was robbed. Of the right to peacefully campaign for the presidency...at least according to him.

"It is one thing to inspect balikbayan boxes, another to desecrate them."— Sen. Miriam Defensor Santiago on the Bureau of Customs' proposal to impose stricter rules on screening balikbayan boxes.

In August, the Bureau of Customs came under fire for wanting to subject balikbayan boxes to random searches.

"The entertainment industry in the Philippines made me feel like one of the most worthless artists in the history of artists."— Gab Valenciano on why he left showbiz.

Gab is now based in the U.S. where he is a social media star, popularizing "Super Selfie" which caught the eye of Beyonce, who asked him to direct her music video for "7/11."

"I’m thankful that I’m a Marcos. I congratulate myself for choosing my parents well." — Sen. Bongbong Marcos on taking pride in being the son of his parents after he announced his vice-presidential bid.

The late dictator's son will run for vice president in the upcoming elections as Miriam Defensor-Santiago's running mate. 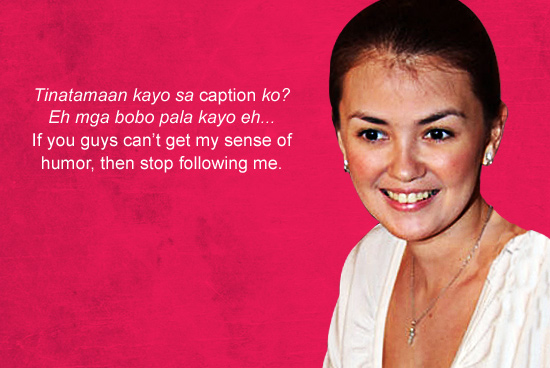 Just another day in the world of celebrities.

"I am asking forgiveness from everyone who got offended by the incident...I also apologize to my mother, who also got hurt...I asked the Liberal Party to remove my name from the list they are considering for their senatorial lineup."— Former MMDA Chair Francis Tolentino on the public outrage brought about by the Playgirls scandal.

At a Liberal Party event in Laguna in September, the emcee announced a "surprise gift" from Francis Tolentino. The Playgirls, a dance group, then performed some rique moves which were caught on camera. Tolentino was later left out of the LP slate but refused to bow out of the senatorial race.

"I'm not interested in getting it from the backdoor. I want to make sure that the people will realize that if they want to have a country where they're going to have real leaders, they have to have honest to goodness clean, fair elections." — Senatorial candidate Richard "Dick" Gordon on his claims that UNA and LP members are asking him to file a disqualification case against Sen. Grace Poe.

For several months, Poe has been topping presidential surveys and has been attacked with disqualification cases left and right. In December, the COMELEC's 1st and 2nd Divisions disqualified Poe from the race and ruled that she did not meet the citizenship requirements. Poe's camp has filed for reconsideration.

"No hate please? A gown is just a gown." — Kim Chiu on fans reacting to Maine Mendoza's gown at the AlDub concert, the same dress that Kim wore on the runway for a fashion show.

The record-breaking Tamang Panahon event of Aldub Nation had Maine Mendoza wearing a gown by Francis Libiran which Kim Chiu also wore on the runway for 2013 fashion show. Fans were quick to comment that Maine was wearing a "recycled" gown and that she deserved better.

"I realized that if we always let him get away with cyberbullying, then he will continue to propagate untruthful claims and malicious gossip on his blog and social media accounts." — Liz Uy on the blog entries in Fashion Pulis which prompted her to file a libel suit.

The issue prompted a number of celebrities to ask social media followers to #StopTheHate. 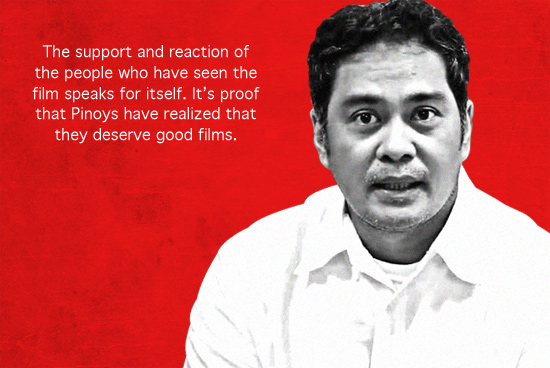 "The support and reaction of the people who have seen the film speaks for itself. It’s proof that Pinoys have realized that they deserve good films." — John Arcilla, who plays Antonio Luna in Heneral Luna, on the success of the historical biopic.

"PILLS!" — Senatorial aspirant Alma Moreno when asked what her reservations were on the RH Law.

It was a lesson on what to expect from our lawmakers. Do we ever learn?

Mar Roxas decided he wanted the youth vote so he enlisted the help of teen stars, including Daniel Padilla and Kathryn Bernardo or KathNiel, among others. It didn't go over well.

Dear Sec. Abaya, we dare you to stand in the middle of a five-hour jam on EDSA and say that.