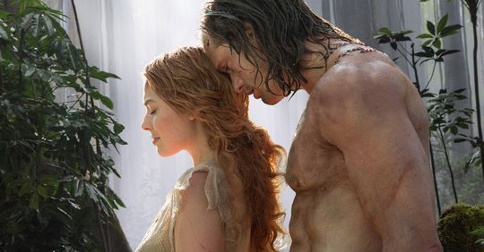 1. Here's your sneak peek at the live-action adaptation of Tarzan

Warner Bros. has released the first trailer for The Legend of Tarzan, the live-action retelling of the classic tale with Alexander Skarsgard taking on the titular character. The plot follows Tarzan who, after living in London for several years, returns to his jungle home to investigate a mining encampment. The film, which is set for release in July 2016, also stars Margot Robbie (as Jane), Samuel L. Jackson, and Christoph Waltz. It's helmed by four-time Harry Potter director, David Yates.

3. Jared Leto sues TMZ over leaked video of him cursing Taylor Swift out

Earlier this week, TMZ released footage of Jared Leto cursing Taylor Swift and her album, 1989. (Notable quote: "F*ck her, I don't give a f*ck about her.") He quickly issued an apology to her and announced that he has filed a copyright lawsuit against the gossip website, saying that the video was obtained and published illegally. The video was fimed by a videographer hired by Leto who sold it to the site for U.S. $2,000 but refused to sign a document confirming that he had the legal right to do so. The clip is still up on the site, despite the videographer's reported request that they not publish it.

“You’re already the voice inside my head. I miss you.” Sorry, we couldn’t help ourselves. A Blink-182 album is coming in 2016, as confirmed to a fan by drummer Travis Barker via a comment on Instagram. Barker, together with bassist and lead vocalist Mark Hoppus, will be onboard the new album, but it looks like guitarist and co-vocalist Tom DeLonge won’t be joining them. Alkaline Trio guitarist Matt Skiba recently replaced DeLonge in live performances and has said that he has discussed joining the band for the comeback album.

Apple recently released a list of the most noteworthy apps of 2015. Can you guess what claimed the top spot? No, it's not Instagram. Periscope, an immensely popular livestreaming app that Twitter acquired earlier this year, was named Apple’s App of the Year—although the Philippines has yet to catch up with the trend. “This game-changer made sharing and watching live videos an instant obsession,” Apple wrote. Will it be the next Snapchat on our shores?

This Japan-based company is looking to make spreading a thing of the past with thinly sliced chocolate that looks like sliced cheese. You can cut them up, make a sandwich...or heck, eat them on their own. We won't judge you. The chocolate slices are sold online and by the bulk.

On December 10, the National Bureau of Investigation (NBI) filed criminal complaints against members of the Philippine National Police-Aviation Security Group (PNP-Avsegroup) and the Office for Transportation Security (OTS) in connection with the arrest and detention of "Laglag Bala" victim Lane Michael White. Two OTS personnel are facing complaints, while four officers from PNP-Avsegroup are facing three other criminal complaints: Violation of Article 293 of the Revised Penal Code for Robbery/Extortion; violations of Republic Act 7438 or the Act defining certain rights of a person arrested, detained or under custodial investigation and duties of arresting, detaining and investigating officers; and Republic Act 3019 (Anti-Graft Law).

8. Poe says people abusing human rights have no right to lead the country

It’s International Human Rights Day today, December 10. And today, Sen. Grace Poe said that a government that violates human rights has no entitlement to lead the country. The presidential aspirant said all people are born with rights in this world, whether rich or poor—that’s why no one should be left out. “Ang gobyerno o ang mga tao na umaabuso sa mga karapatang pantao ay lumalabag sa International Human Rights at walang karapatang mamuno sa ating bansa,” she added. This is why, she said, she is confident that the Supreme Court (SC) will hear her plea. The senator was earlier disqualified by the Commission on Elections (COMELEC) which ruled that she failed to meet the 10-year residency requirement to run for president. This is only one of the four disqualification cases filed against her before the poll body.

It’s a good thing that the Philippines has started to recognize the damage being caused on the environment by plastic bags. Everyone now has a stack of eco bags, but most of them are easily misplaced or discarded. Here are 10 shopping bags for every personality that are cool enough to be kept...and used.

This fad isn't going anywhere. We round up a new list of the best golden-brown tonkatsu dishes you can find in the Metro. Ready your appetites!